But as awesome as pie is, deserving of a National Day, someone's decided that pie is too awesome for a single day. Some woman named Olivia Munn has decided that there needs to a National Pie Week, and she's decided to act: she has a petition going where if she can get 10000 signatures by this coming Friday, she'll jump into a giant pie. Of course, the Internet being what the Internet is, she's already well past 26000 signature as of this writing.

I have no idea who Olivia Munn is, but this is what she apparently looks like: 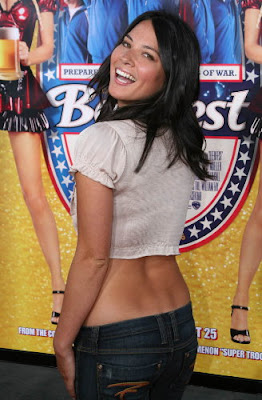 She doesn't look like the kind of person who spends a great deal of time consuming pie in the usual manner, does she? Hmmmmm.

Anyway, I was going to mention this in the upcoming Sunday Burst of Weirdness, but it's time-sensitive and I'm not sure if I'll even get around to a Burst of Weirdness this week. But National Pie Week isn't a terrible idea, anyway.
scrawled here by Kelly Sedinger at 2:41 PM