OK! After my most recent round of hints, I think we've finally pegged UIs 49 and 50. Number 49 is the FAA Credit Union on Aviation Boulevard in Los Angeles, near LAX. A credit union, you ask? As an Unidentified Earth location? What gives? Well, this building also serves as the exterior for the Miami-Dade Crime Lab on CSI: Miami. When you watch that show and David Caruso is standing outside this cool-looking building with the curving exterior, putting on his sunglasses, he's actually standing in California, outside a credit union.

Installment 50 is the Lego statue of the Loch Ness Monster (visible here) at Disney World.

Oddly, there are no correct guesses as of yet for UI 52, which surprises me; I thought that one would go quickly. I wasn't really trying to make it hard. Studying the nature of the image should reveal the nature of the thing pictured there, if that helps...think shape.

And finally, time for what is probably another easy one, I hope. I'll try to mix the hard ones with the easy ones better in the future. 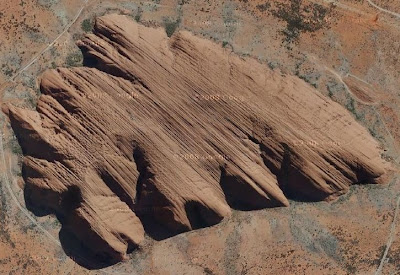 Where are we? Rot-13 your guesses, please!
scrawled here by Kelly Sedinger at 9:07 AM

RATS! I FINALLY knew one of these and someone beat me to it. No fair!