Yesterday was my local library's quarterly used book sale, an event that always fills my heart with joy and my arms with pain (from lugging out a huge number of books). The pickings this time weren't as good from the SF standpoint as the sale in March, but that sale was an outlier of sorts as far as SF goes; I've been going to this library's sales for more than three years now and have never seen as much old SF as I did on that day. But I was still able to get the second, third, and fourth books in Frank Herbert's Dune series (I already own Dune), and some other nifty stuff on the non-SF front. Behold: 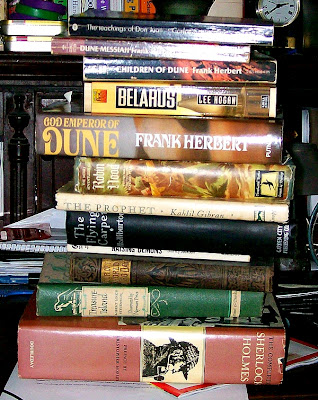 And that's not all I bought: I picked up five and four books respectively for The Daughter and for The Wife, in addition to all that above, and all for $8.75. Amazing.

The best part is that I'll likely end up profiting on this book sale, because I also snagged a pristine Library of America edition of the essays and lectures of Ralph Waldo Emerson, and when I've sold LoA volumes on eBay in the past, they've always gone for somewhere around fifteen bucks each. I may also auction that Complete Sherlock Holmes, and since that copy of Halliburton's The Flying Carpet is nicer than my other two copies of the same book, I'll keep that one and auction one of the others.

It's hard to see, but that third book from the bottom is an old translation of Around the World in Eighty Days by Jules Verne -- it's so old that the title is given there as Tour of the World in Eighty Days. There's no date in the book that I can find, unfortunately, but the thing is clearly quite old, judging by the browning of the paper, the typeface, and the old stylistic thing where book titles were always followed by a period in that era. I'll have to investigate this further, but I strongly suspect that this book will be of more use to collectors than to anyone as a reading copy of Verne's novel.

Oh, and that paperback of the Carlos Castaneda book at the top? I found in its pages the original owner's receipt of purchase. They bought it at the Canisius College bookstore on April 2, 1971. I love finding stuff in old books.

So where am I going to put all this stuff? No idea at all. Duh!
scrawled here by Kelly Sedinger at 4:22 AM

I have used dollar bills as bookmarks for years. Every now and then I'll pick up a book I have not read for a while and find money in it.

What a great haul! Much better than the AAUW book sale.

You do realize that books make fabulous insulation? A wall-sized bookshelf filled with books helps in keeping the Buffalo Cold outside- although it doesn't help when one has more books then space...

Is the phrase "Monty Haul" common koine? The only place I've seen it used is the infamous and uproarious "Bimbos of the Death Sun" by Sharyn McCrumb.