Is this thing on?

Not be mean or anything, but now that it's been more than a day since they all went into the cyber-weeds, it's sure a good thing that some of us have held out on the "Hey, let's get all of Buffalo's blogs into one basket!" notion, eh?

UPDATE: OK, what the hell? Kevin reports that he can at least access WNYMedia blogs, but still gets nothing on the main WNYMedia site. I, however, only get this screen: 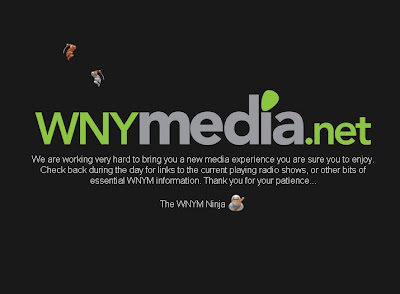 whenever I try to access those same blogs. However, I can get the entire stable of WNYMedia blogs if I use AOL's browser, as opposed to Firefox. This is the case even after I cleared my Firefox cache. What on Earth is going on? Is WNYMedia.net actually implementing some version of their site that will not be accessible to Firefox users?

What's going on over there, guys???
scrawled here by Kelly Sedinger at 3:12 PM

Pundit, Jennifer, and Geek are functional as of 9:30 and I'm using firefox. And yep, still playing David Brenner to Geek's Carson.

Not for me, they're not. Just tried again: cleared cache and refreshed and everything. Same screen comes up.

I accessed those blogs through Safari, Jaquandor, in case that means anything. In fact, I just checked Buffalo Pundit again a minute ago.

Checked again this morning, just now. Cleared the cache again, download history, and everything. Still nothing.

After all the slowness complaints about our last host, we moved to a dedicated server at MediaTemple.

Well, let's just say that was probably the absolute worst thing we ever did. The whole experience was a nightmare and DNS propagation to the new server took forever.

We moved back to the original host and we should be up soon.

I tried to access the blogs and site around 3:30 p.,m, Jaquandor, and I couldn't get anything other than the WNYMedia ninja screen.

I hope Geek doesn't get any more crap from the Internet people and can get things back up and relax a little.

What is this thing they call "internet"?

For some reason, the song "Buffalo Blogs, won't you come out tonight" is running through my head.