For me, the Detroit Tigers fall into that last category. I neither hate them nor like them; they're just kind of there. But this guy ranks about as high with me as a sports figure can rate: 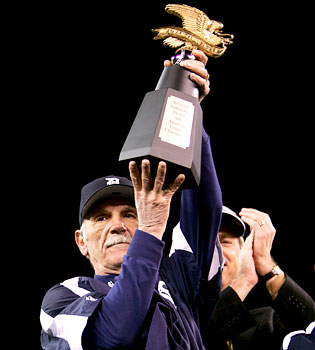 I mean, in my personal sports pantheon, Jim Leyland ranks with Marv Levy, Jim Kelly, and Thurman Thomas. If he quit baseball and became head coach of the New England Stupid Patriots, I might...well, no, I wouldn't go that far. A guy's got to have his limits, you know. But still, seeing Leyland win his second pennant is wonderful, and I'll be rooting for the Tigers in the World Series.

(Last time the Tigers won the Series, their most famous fan was Thomas Sullivan Magnum!)
scrawled here by Kelly Sedinger at 2:20 PM