I like roller coasters, but only to a point.

For one thing, I don't like to be flipped upside-down, which rules out most if not all of the niftiest coasters that come online these days. I like a fast ride that twists and turns, but I'm not into wild shifts in G-forces, and I'm not interested much in one-point-nine seconds of apparent weightlessness. I'm more excited by speed than by being whipped around. In terms of materials, I like both wood and steel. And if there's one thing I like less than being flipped upside-down, it's coasters that take place indoors, in the dark.

I don't like Space Mountain, for example. I don't care that as coasters go, its maximum speed is incredibly tame and that the exact same ride in broad daylight would be dull as ditchwater. I don't like not being able to see where I'm going, I don't like not knowing when the dips are going to come or whether I'm going to be tossed to the left or the right or even when the ride is going to end.

What am I gabbing about here? Well, I've come of late to thinking of our emotional lives as being a roller coaster of sorts. Sometimes we're tossed upwards, sometimes we lurch left, other times we lurch right, and sadly, sometimes the bottom drops out and we plummet.

But if life's a roller coaster, sometimes I think it's of the Space Mountain variety, in that we never know if and when the drops and twists are coming. Now, as much as I dislike that in a theme park ride, I don't mind it so much as a metaphor for life. What makes me hate the ride at Disney World is precisely what makes life itself worthwhile.

Over the last few weeks, I've been thinking about the series of articles I blogged about a while back, about suicide and the Golden Gate Bridge. One thing I recall is the notion that lots of times, people who commit suicide aren't obviously suffering existential depression, and sometimes, the act of suicide is as impulsive as the act of grabbing a bottle of chocolate milk on my way out of The Store at the end of my shift. I wonder if they just hate those sudden, unseen drops, and if they just one day decide to do the one thing they can do to stop the ride so they can get off.

Anyway, sorry for the downer of a post, but it's been one month today. Here's where Little Quinn now resides: 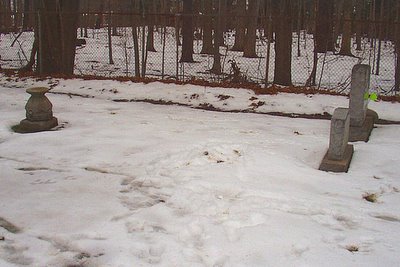 We were there on Christmas day. There were a handful of other people in the cemetery, but it was all very quiet and peaceful, as it should be.

His grave is right about where all those footprints are, behind the two gravestones to the right. As of yet, he has no marker. I'm not sure when that will happen. He's in a row of graves occupied by infants, and that roster of gravestones might constitute the saddest thing I've ever read. Several stones give only a single date, clearly for babies whose lives were over within the march of one day if they lived at all; all but one of these gave full names for the babies buried there. That one exception simply read "Baby Boy" and then the surname. This poor child never even had a name. There's another stone for a child who died just six days shy of reaching her first birthday.

The tears still come, but they come by surprise. There are no consistent triggers; there are no subjects that if brought up in casual conversation cause the breakdowns. No, they just happen. Kind of like the drops on Space Mountain, and I hate them for the same reason. What keeps me going, though, is the knowledge that every coaster has to climb, too.

We often refer to the snow around here as a "blanket". That metaphor is also terribly apt, right now. Little Quinn has a cold blanket -- but I hope that wherever he really is, it's warm enough that he doesn't need one.
scrawled here by Kelly Sedinger at 5:10 PM