As I noted we'd be doing as normal, we put up our Christmas tree the other night. This year we've finally eschewed the real tree in favor of, well, a fake one. I did sort of miss the ritual of going out to some little parking lot full of expensive trees and finding the small but still lovely one that everybody else passed up, and I miss that amazing scent of fresh pine that permeates the apartment while the tree is up -- no number of burning pine-scented candles or incense can create that same aroma. I did not miss standing outside in the bitter cold (somehow, tree shopping always fell on the coldest day yet of winter) sawing the chunk off the bottom, nor did I miss the sometimes Herculean effort of getting the tree straight in its holder (normally made even more Herculean by our unfailing habit of getting a tree with a sizeable, but unnoticeable anyplace but home, kink in the trunk that means you can have the bottom straight and the top cockeyed, or the bottom cockeyed and the top straight, but not both so we end up rotating the tree so that the cockeyed top or bottom looks less cockeyed from the most common sightline to the tree in the apartment. Whew.

Nope, none of that this year -- just unpack, unfold, and plug in. And decorate. And here's how it looks: 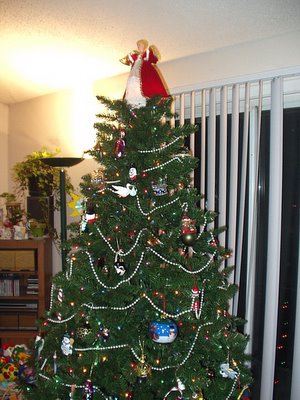 Not too shabby. We're also used to a wider and shorter tree, but that's of small concern. We're happy with it.

And this Christmas season, from time to time I'll post a photo or two of some of our favorite Christmas ornaments. We use very few generic, "box set" ornaments -- the ones that come in the four-packs at Target or Wal-Mart. We started out using quite a few of those, when we were first married, but each year, I pick out a handful of new ornaments at Christmas stores and places like Vidler's (for God's sake, Western New Yorkers reading this, if you've never been to Vidler's in East Aurora, close your browser and go! -Ed.). The result of this process is that our Christmas tree becomes more and more personalized with each passing year, and each ornament has a memory now of a time or a place, and sometimes both. And yes, we include The Daughter in this practice, so when she finally moves out on her own, she'll have a good set of ornaments of her own to start with. (So too it would have been with Little Quinn. I'm going to keep buying him ornaments, though. He's still a part of the family, if not in a physical way.)

Anyhow, this is the oldest ornament we own. My grandmother (who died in 1986) made this for me when I was, I think, no more than two years old. (It has a mate that belongs to my sister.) Somehow, its color has never faded one bit -- the trim and the tassle are still vibrant gold. It's a pretty big and heavy thing, which means that it has to be hung from a strong branch, and that tassle requires that it be hung fairly high up (cats plus string tassle equals disaster for said tassle). But I'm glad to see it, every single year when we unpack the ornaments. 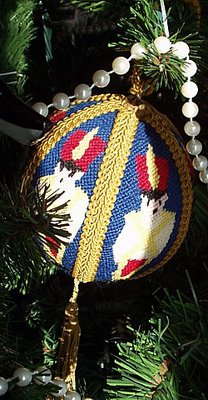 Similar care must be paid when hanging this next one, which came as a set of three (the others being Santa's sleigh and a church, all with the same windchimes beneath). I bought these from an outfit called "Past Times", which used to be a really nifty company whose catalog formed the basis of a lot of my Christmas shopping in the mid and late 1990s. (Past Times is still around, actually, although it appears that they've abandoned their US-based shipping service and only operate out of the UK now.) I often daydreamed about opening up a bookstore in a college town and decorating it with tchotchkes from Past-Times...but no matter. I always loved their ornaments, and maybe if the finances are ever good again, I'll throw some business their way.

I'll post more ornament photos as the Christmas season marches on! (And other bloggers would be well advised to do the same. It's been a while since I kicked off a blog-meme!)
scrawled here by Kelly Sedinger at 2:23 PM