My slow slog through the Bible has been stalled of late (I'm in Exodus right now, and if memory serves, Moses is soon to go up on top of a mountain and have a chat with the Big Cheese), but my slow slog through The Brothers Karamazov continues apace. I tried reading Brothers K three years ago, but I wasn't ready for it, and I just plain didn't understand it at all. I'm getting more of it this time around, but it's still pretty slow going: I'm on page 157 (my translation is by Andrew MacAndrew, for Bantam Classics, available as an e-book here) and it's over 950 pages, total, so it'll be a while.

Dostoevsky's storytelling style takes some getting used to. He has a habit of writing along in a scene, and then bringing in some new character, at which point he breaks off to give the reader a history of that particular character. His characters are all fascinating, but what's difficult is that when he's done introducing us to these new characters (and he frequently takes an entire chapter to do so), he drops up right back into the original scene. I'm doing a lot of backtracking to figure out what's going on.

In terms of "getting" the book, I wonder if my regular church attendance over the last fifteen months (beginning shortly after Little Quinn's birth, and continuing despite his passing) has helped me to understand Dostoevsky's spiritual themes, if only to a very small degree. The book's introduction makes clear that Dostoevsky's main themes are the nature of Man and how he relates to God; and right now, I'm in the midst of a section of the book called "The Sensualists", in which we are really delving into the various conflicts within the Karamazov family, conflicts which are almost all really unsavory in nature. Alyosha (the "main" character) is apparently struggling to rise above his family's sensual nature, so the book is right now shaping up to at least be in part about Alyosha's spiritual testing. Or so I think. As I said, I'm only a short way into the book.

For those who have read the book, I've just made the acquaintance of Smerdyakov, Fyodor Karamazov's bastard son, and I remember this passage from my first attempt at reading The Brothers K (not my translation, but it's close enough):

There is a remarkable picture by the painter Kramskoy, called "Contemplation." There is a forest in winter, and on a roadway through the forest, in absolute solitude, stands a peasant in a torn kaftan and bark shoes. He stands, as it were, lost in thought. Yet he is not thinking; he is "contemplating." If anyone touched him he would start and look at one as though awakening and bewildered. It's true he would come to himself immediately; but if he were asked what he had been thinking about, he would remember nothing. Yet probably he has, hidden within himself, the impression which had dominated him during the period of contemplation. Those impressions are dear to him and no doubt he hoards them imperceptibly, and even unconsciously. How and why, of course, he does not know either. He may suddenly, after hoarding impressions for many years, abandon everything and go off to Jerusalem on a pilgrimage for his soul's salvation, or perhaps he will suddenly set fire to his native village, and perhaps do both. There are a good many "contemplatives" among the peasantry.

I love how Dostoevsky reaches into the visual art of his time to make a further illustrative point about his character. It interests me that, in using words to describe Smerdyakov, Dostoevsky turns to using more words to describe a visual painting that illustrates his point, since he couldn't assume that many of his readers at all would have seen this particular painting. 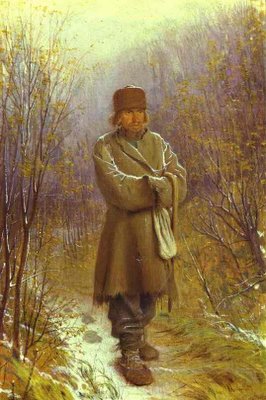 I've found that what makes reading older literary works difficult, for me, isn't so much the often antiquated language but the allusions to cultural artifacts that would have been well known in the author's time, but are little-known today.

scrawled here by Kelly Sedinger at 10:28 AM