The other day I tackled a Fifteen Things About Books list-thing, and now here's my take on a supplemental meme offered up by John Scalzi: fifteen things about me and writing. Again, some of this stuff may be familiar to long-term readers of this blog.

(By the way, before I begin, I see that Weirdwriter has collated a bunch of links to posts where other bloggers have completed one or both of these list-memes, here. Check them out. And check out Weirdwriter, too -- looks like interesting stuff there, including his own fifteen things about books. There are too many interesting blogs out there -- we need to thin the herd, folks! [No, he doesn't mean that. -Ed.])

1. Writing's something I always remember being pretty good at doing, but as a vocational desire, it's been on again-and-off again. Sometimes I really want to write for a living, but more times I just want to write and have some people read it. The more the better, obviously, but a handful of people who really like what I write are better than lots of people going "Meh" at my stuff.

2. That said, I'd love to be a freelance copywriter. I tried doing this once before, when I was unemployed between getting canned from the telesales job and being hired at The Store, but I didn't have enough resources to really get the ball rolling on that.

3. My first ever rejection slip was for my story "Graveyard Waltz", which I wrote back in 1999 or 2000 and eventually posted here after I ran out of markets for it and basically decided that it was too amateurish an effort to be salable anyway. I was actually happy to get that rejection slip, as I took it as a sign that I was "in the game". (Every subsequent rejection slip I've received has pissed me off, except for the very kindly written ones from Black Gate.)

4. In grade school, I tended to love creative writing assignments that allowed lots of latitude and detested ones that were rigidly restricted to a certain theme and subject matter. In recent years, I've come to regret blowing off the "Write a story from the point of view of the Thanksgiving turkey" assignment. I really could have amped up the horror quotient on that.

5. My fifth-grade teacher once grouped our class into four or five groups and had us each write a little Christmas play that we then had to perform/read to the class. My group -- which included The ever-flammable Mr. Jones -- came up with a comedic thing in which Santa is laid out by food poisoning, and thus the delivery of the presents falls to the Elves. The title was, naturally enough, How the Elves Saved Christmas. To this day I'm mystified as to how I avoided getting cast as the fat elf that gets made fun of the whole time. For years after that, I wrote stuff in screenplay format.

6. My writing output during Little Quinn's lifetime was limited to a couple of very short stories, an article that appeared in The Buffalo News, and my postings here. I'm not entirely sure why that is, because I really do not believe for a second that life with Little Quinn, demanding as it was, really caused my "creative juices" to dry up. Things with him were hard, and everyday life with him was draining, but I think the larger factor there might well have been a combination of sloth and a desire to direct my energies elsewhere. I certainly decided that I care a lot less about getting published than I did before he came (hence the blog-serialization of The Promised King). But I did learn one very important lesson during Little Quinn's life: brevity in fiction. Before he came, my shortest story came in at something like 7500 words. Since then, I've written several very short stories, and I have one that I wrote just last week that's under 3000 words. I'm not sure if Little Quinn had any kind of causal relationship to my learning how to write short, but that's when it happened.

7. Yes, I wrote Star Wars fanfic, in the form of screenplays to a series of "films" that took the basic Star Wars story, changed the names and some of the relationships, and told the same tale in the way that I would have told it. I still read that stuff with some affection. (Not so all the cross-over mash-up stuff we'd write in school, wherein James Bond and Indiana Jones would fight side-by-side against some Blofeld-style villain whose plots made no sense at all.)

8. I really do prefer writing fiction in longhand first, before I type it. I type fairly quickly, and longhand really slows the process down so I can think about what I'm writing.

9. Thanks to Stephen King's On Writing, I harbor an irrational hatred of adverbs and I almost never use any verb of dialogue attribution other than "said".

10. I have absolutely no interest in attending something like Clarion or a writing workshop. I have this pigheaded insistence on trusting my own instincts when writing, and not trying to tailor things for a specific audience.

11. I tend to be fairly brutal on my own writing when I'm editing drafts. Here's a photo of two current manuscripts of mine to illustrate. On the left is a page of the current short story, and on the left is a rare attempt at poetry. Note all the red ink -- those are my annotations, edits, and notes for revision. 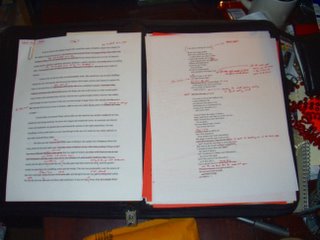 12. I first heard the words "Show, don't tell" in eleventh grade. I always had a hard time with this, because there's a fine line between giving too much detail and not enough, and besides, sometimes telling is just fine if you can do it artfully enough.

13. Take it from me: grade school teachers tend to be less than receptive to a satirical approach to their writing assignments.

14. When I'm writing at the desk, my time tends to break down as one-third actual writing, one-third daydreaming whilst listening to the music on the headphones, and one-third reading something.

15. I used to be really bothered by people who can't write to save their lives, but more recently I've come to see writing as a skill that people either have or don't have, kind of like carpentry or piano-playing. I can write, but I can't draw to save my life. Some people are the exact opposite. And some people, damn their souls for all Eternity, can do both.

OK, that's it.
scrawled here by Kelly Sedinger at 1:33 AM