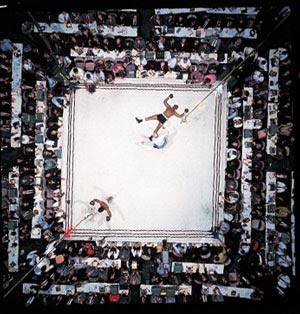 From this SportsFilter thread, I find The Observer's ten best sports photographs. The list, as one might expect from a British paper, is heavy on boxing, soccer and rugby; nothing from basketball, football (American style), baseball, or anything else. But the pictures are pretty cool.

I don't like boxing much at all; my feelings are encapsulated by something I once heard from a comedian whose name I've long since forgotten: "You have to wonder about a society that considers masturbation 'self-abuse' and boxing, a sport." I just don't like watching two people beat the crap out of each other for sporting purposes. But I've always had a fondness for Muhammad Ali, and I have to admit I choked up a little when I recognized him as he went to light the Olympic Flame at the 1996 Summer Games. Plus, as boxing images go, this picture is just cool. As the photographer notes, back then there was no advertising emblazoned on the floor of the ring; just stark white that contrasts well with the bodies of the men actually fighting in the ring.