Step One: I am powerless before lumens....

I have a co-worker who likes to poke fun at my addiction. Now, it's not usually nice to make fun of someone's addictions, but in this case, well, it's part of my coping strategy. And at least I admit that I have this addiction, which I'm told is the first step toward dealing with it. My problem is...that aside from admitting the existence of this addiction, I have little intention of stopping it any time soon.

I can't get enough of 'em. I love 'em. Whenever I find myself in possession of a gift card to Lowe's or Home Depot and I genuinely can't think of a new tool that I really need to get, I default to a flashlight or a worklight. I can't stop! And I've been this way virtually all of my life. I can't remember a time when I wasn't excited by flashlights, all the way back to the first one I remember owning, when I was five or six, and one of my birthday (or Christmas, or Easter, or some point when my parents just wanted to shut me up) gifts was one of those red plastic Ever-ready flashlights.

How many flashlights do I own? Well, here's a guided tour...and this isn't even all of them!

OK, first up. I keep this fellow in my laptop bag, because it's my belief that one should always have some kind of flashlight ready to hand, and in this way, I'm always prepared for a sudden need for light should such a need arise. It's also a combination laser-pointer: you click the button once for light (it has 8 LEDs), twice for laser, and thrice for light and laser. 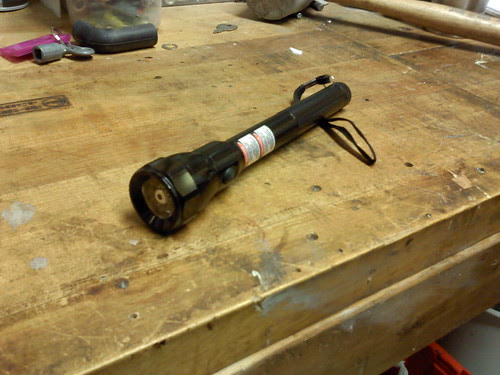 Next up is this old-school Maglite. This is in my toolbag at work. In truth, I rarely use it, because most times at work when I need light I reach to the one of two lights that I carry on me at all times. (More on those later.) In my experience, Maglite's flashlights are of very high quality. Unless you actually set out to break them, they just don't wear out. I have one of those black D-cell "billy club" Maglites -- not pictured in this post -- that I bought twenty years ago, and it still shines as brightly as ever. I've never even had to change the bulb.) 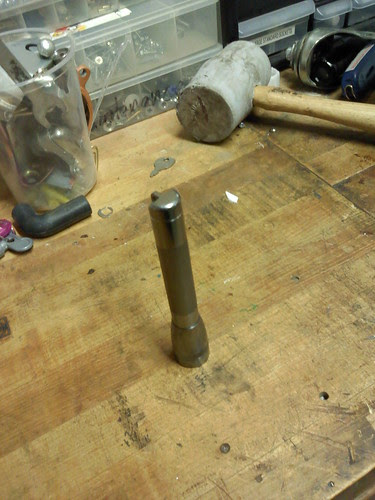 You can buy kits to retrofit Maglites so as to remove the incandescent bulbs and fit them with LEDs, but I've never bothered.

Then there's this nifty light by Stanley: 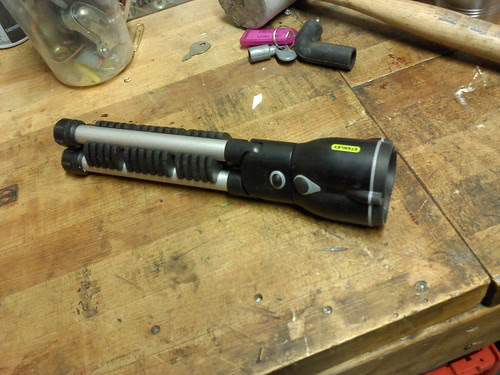 Looks pretty cool, doesn't it? It's fairly big, actually -- that thing fits a two-handed grip, which makes it feel like...yeah...a lightsaber handle! Yes! But that's not why I bought this light. I got this one because of a nifty feature. See how it has two buttons? The one closest the lens turns on the light (a very bright LED). The lower button, though, springs open the legs, creating a tripod. And the head swivels, allowing you to do this: 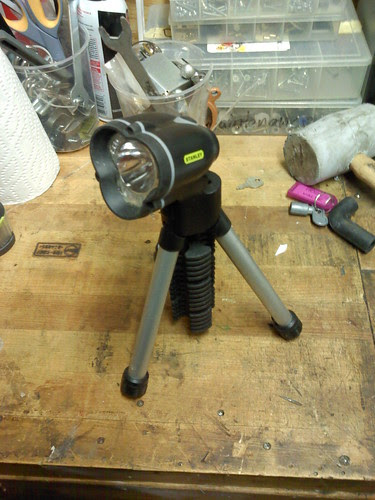 Thus a hand-held flashlight becomes a free-standing worklight. This has proven highly useful to me over the last few years!

Also in the worklight department is this item, from Ryobi's Tek4 line of products: 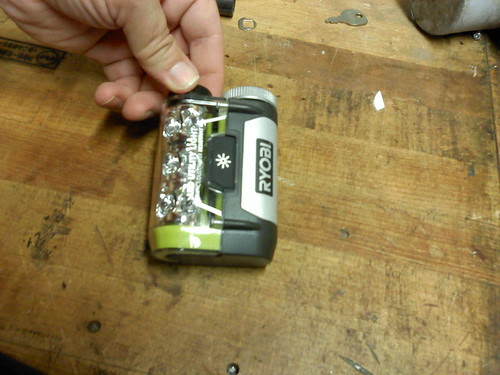 There are six bright LEDs in the clear cylinder on the left side of the light. The LEDs can be aimed by rotating the cylinder via the little knob where my fingers are. On the backside of this light is a magnet, so I can stick this light to something metal, turn it on, aim the LEDs, and there's a worklight. This is useful where the Stanley tripod light isn't practical. This light also comes with a little square of metal which you can temporarily attach to stuff, if there is no iron-based metal where you're working.

Ryobi's Tek4 line is a group of products used for measuring, calculating, illuminating, and other types of tasks that confront handymen on a regular basis. The products all use the same battery and charger, which is nice. I own one other Tek4 product, which is this handheld flashlight: 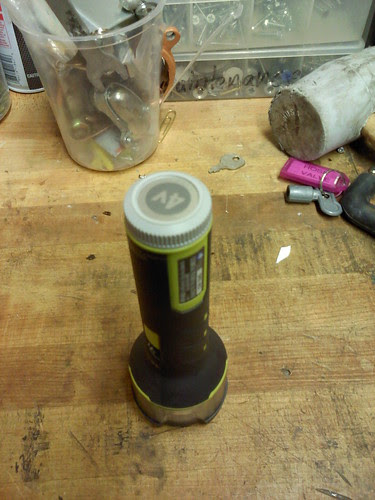 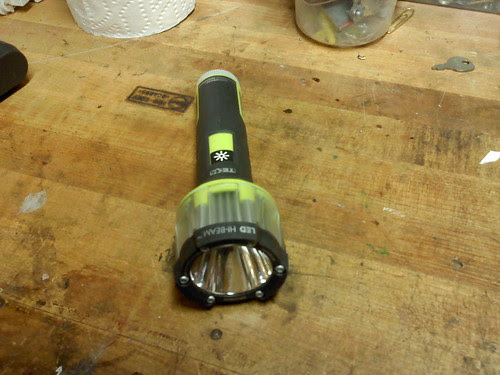 I haven't had a whole lot of use for this light yet, although it did come in really handy during a power outage at work a few weeks back. This light produces a freakishly bright 220 lumens. (By comparison, my 2 D-cell Maglite billyclub light produces 36.5 lumens.) This light is so bright as to be almost intimidating. If I was ever stranded in a dark forest at night with a serial killer on the loose, this is the flashlight I want. Nobody's sneaking up on me when I'm shining this light around. This light may actually be too bright for normal applications, but if Tom Hanks had had one of these with him, he wouldn't have spent four years on that island talking to a volley ball, I can tell you that. He'd be signaling the hell out of freighters on the horizon.

This brings me to the lights I carry in my pockets at work. I reach for a flashlight more often than I reach for my screwdriver, so carrying two of them around isn't as silly as it sounds. I carry this penlight, first of all: 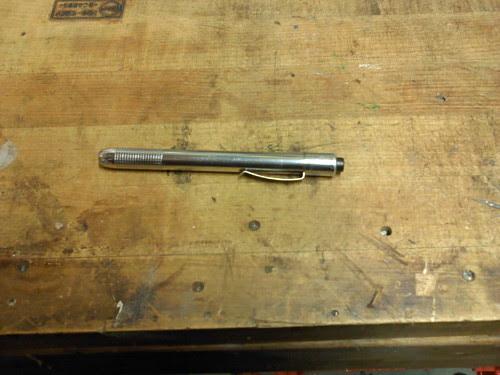 This light is useful for shining into small areas, like inside pieces of equipment when I need to look for something that's creating problems. It's the Energizer brand, but I suspect that any penlight will do the task just fine. In my back pocket I carry this light, two pens, and a small notepad.

The other light that's always on me -- and the one I use the most often, by far -- is this new model LED light by Maglite: 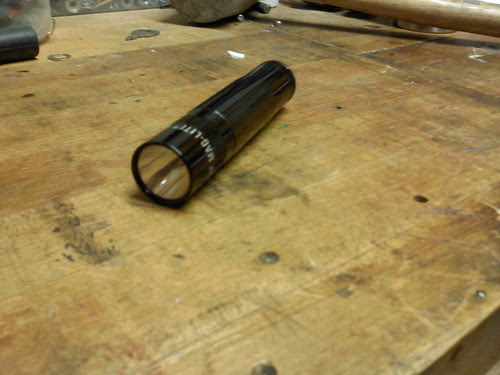 That's the Maglite XL50, right there, and let me tell you, I'd by ten of these, if I could. I love this thing. It puts out a beam of 104 lumens, which is plenty powerful for lots of things, such as when I'm standing on the floor at The Store and I need to seek out something up in the rafters, which are more than twenty feet above me and obscured by giant lights of their own. It's also one of those lights with multiple functions: click the tail once, and you get a full beam; click it twice and you get half-brightness; click it three times and you get a rapid pulse, that's ideal for signaling rescue parties if you're stranded on a mountain. I see that Maglite now has a XL200 model, that adds two light modes and runs the lumens up to 172. It will be mine. Oh yes, it will be mine!

And no, that's not all! Worklights, magnetic lights, penlights...what about keyring lights? Ah yes...I have two. On the same key ring. It's a sickness, I tell you. 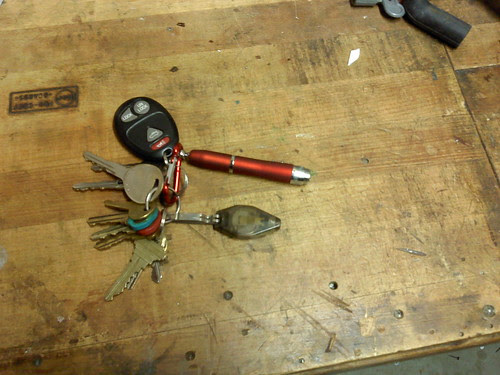 The top one -- the red one -- really doesn't strike me as a terribly high-quality item, and I'm sure it will not be long-lived. It was only two bucks at Home Depot, so it's not like it will break my heart when it stops working. But it has an LED light, a laser pointer, and -- get this -- a blacklight. Why would I need a black light? Maybe I'm looking for one of these substances. I have no idea. But hey, it was two bucks. Oh, and that light has a little ballpoint pen inside it. That other one, the lower one, is surprisingly bright for such a teeny light, and it's got a signal mode, too.

What other flashlights do I have around? Well, I keep another old-school Maglite on my desk at Casa Jaquandor. There's my headlamp, which I keep on my hardhat at work. And there are a bunch of other small flashlights floating around the apartment, but more than a few of those have disappeared into the trainwreck-on-top-of-a-tire-fire that is The Daughter's room. That's OK, though, because the Holidays are fast approaching, which means...cheap multipacks of cheap flashlights at all the hardware stores! Huzzah!!

I LOVE the tripod flashlight. I think you have a cool collection. Not weird, ok, a smidge, but that's cool.

I would probably go for a Maglite XL50 if only it used AA batteries. My radio does, my Mini Maglite LED does, one of my cameras does... It's so nice to only buy one kind of battery. Who can find 3 AAA's when you need them?

David: Yeah, I was surprised to see that a LOT of smaller flashlights these days use the 3-AAA set-up, for some reason. I wonder why that is. I have a pretty steady access to batteries through my day job, but yeah, keeping a pack of AAAs around just for flashlights is kind of a pain...unless one does what I did. But more than one flashlight that uses 'em!