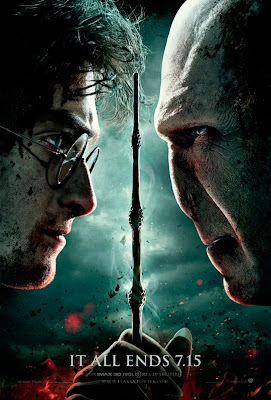 I'd like to think that we're not done with him, actually. JK Rowling is still on the young side, and she should have many years ahead of her. I wouldn't mind at all if, maybe ten years from now, she decides to take up the pen again and let us in on what happens now. Maybe Hogwarts: The Next Generation. I posed this question on Facebook a bit ago, and one person said, "What's wrong with having a story finished?" And I'm thinking, Was this Harry's only story? The kid's only in his 40s when the first story ends!

But anyway, about the movie of Deathly Hallows, or more specifically, part II of the movie of Deathly Hallows. I don't think that a single bad film was made out of the entire lot of the Potter films -- Chamber of Secrets comes closest, and even it is quite entertaining and watchable, even if it doesn't really do a single thing to expand on the cinematic Potterverse from Sorceror's Stone -- and this one is, like all the others, quite fine indeed. No, it's not perfect; none of them are. But they get a lot right in this one – just about everything they need to get right, actually.

It's an odd thing, how the Harry Potter franchise has ended twice. First the books were all out, but the arrival of that final book – even though it finished the story and told us all that happened – didn't really have that feeling of ending, precisely because we knew, at the time, that there were still three movies (which turned out to be four, what with the split of Deathly Hallows in two) to come. And sure enough, the real feeling of an ending, of an era closing, of Harry Potter now joining the ranks of things that are complete is here now, with this final movie.

When I discovered Harry Potter, there were just two books, but Prisoner of Azkaban came out shortly thereafter. This was in 1998 or 1999 or so. The movies didn't start coming out until 2001. At the time I was skeptical that the filmmakers would be able to make all the books with primarily the same cast; I figured at least one of the major characters would have to be recast at some point in the line, but as it happened, the only one that had to be recast was Dumbledore, and that was because Richard Harris passed away after Chamber of Secrets.

I actually don't have a great deal to say about Deathly Hallows part two -- just some random notes, really. I thought it a wonderful close to the series in general.

:: I'm hard-pressed to think of a single weak link in the entire cast of this entire series of movies. I particularly admire Michael Gambon's work as Albus Dumbledore, though. I've read some critiques of his interpretation of Dumbledore, but what he's always managed to capture for me is the sense of distance that surrounds the character. In the books, even though Dumbledore often comes off as a kindly old man, there is always the hint of many things going on underneath his surface and that he has thoughts which are forever off-limits to Harry and friends. There's an air of mystery that always surrounds Dumbledore that Gambon very ably captures. It would have been too easy for Gambon to play Dumbledore as "Gandalf the Second", but to his credit, he never did.

:: Maggie Smith has been in great need of a real moment in these films, ever since the first one. And boy howdy, did she get one.

:: If ever they needed a partial reason to muddle with the script a bit and deviate from the books, the first ten minutes or so was probably it. Part One of Deathly Hallows ended on a perfect break point, but it left a less-than-enthralling starting point for Part Two. The plot gets boiling quickly enough, but there's a bit of talking at the beginning that keeps the pacing down a bit.

:: Our Big Three – Daniel Radcliffe, Rupert Grint, and Emma Watson – have really grown well over the course of these films. They've developed finely as actors, and the series frankly would not work at all if they hadn't. Grint and Watson shine as they come together finally as a couple, and Radcliffe? He just takes over. He really does. His Harry Potter in this movie (and in the previous half) is finally coming of age as a Wizard, and Radcliffe nails that portrayal, right down to his sad but serene acceptance that he must go to what he thinks is his own death.

:: I love Ralph Fiennes as Voldemort. I really do. Until now he has played Voldemort in a quietly menacing way, but then, when his victory seems utterly at hand, he begins to mug and preen and gloat and allow his overconfidence to show. It's really quite superb, and I think Voldemort will be remembered well in the annals of movie villains.

:: And then there's Alan Rickman, who finally gets his payoff as Severus Snape. He's just a great, great actor. He truly is. His resignation when he knows that death is less than a minute away, and his willingness to at last show emotions to Harry Potter that he has kept tightly in control for all these years, is terribly heartbreaking. "Take them," he says, referring to his own tears; and, of course, his last reminder to Harry that he has his mother's eyes. The only thing missing – and it's more JK Rowling's problem than anyone's with the film – is insight into just how Snape was able to keep hold of himself during all the years he had to do awful things on little more assurance than Dumbledore's faith in him.

:: OK, the very last battle between Harry and Voldemort? I can't quite make up my mind about it. It's filmed wonderfully, but it's done very differently in the book, where Harry and Voldemort circle each other, talking, before the final bit of magic comes. Harry's explanation as to why the Elder Wand won't kill him no matter who commands it to? In the book, Harry says that to Voldemort before the end, and it creates terrific suspense: Is Harry right, or is he wrong? In the movie, though, we don't learn this until afterwards, and to me it felt like the wrong time to do it. Even if David Yates was going to save the explanation for afterwards, there still should have been a line for Harry, something like "The Elder Wand will never kill me, Tom Riddle. And you're too blind and twisted to figure out why."

I also loved how, in the book, that final confrontation comes as everyone – the entire cast that isn't dead by that point – is gathered round to watch. Everyone sees what happens, everyone hears it. In the movie, Harry and Voldemort have their final moment alone, unwitnessed by everyone (except Ron and Hermione). But then, I loved Harry's "Let's finish this as we started – together!" before he grabs Voldemort and jumps off the tower. And I loved how Voldemort's demise was depicted – no sudden flash of death, but his screaming as his body suddenly and slowly fragmented into ash that fluttered away in the breeze. It was a very striking moment. The problem was that there wasn't enough build-up to it, so when Voldemort started to disintegrate, I was thinking, "Wait, that's it? Harry beat him already?" At the very least, those last two dueling spells should have been shouted out, as they were in the book, with Voldemort's Avada kedavra meeting Harry's Expelliarmus head-on.

So on one hand, it bugged me that Harry never explained to Voldemort just why the Elder Wand wouldn't work for him. But on the other, how great is it that Hermione asked Harry why the Elder Wand didnt' work for Voldemort? The most important bit of magical knowledge in the entire series comes down to something Harry knew and figured out, something that no one else did. He's come along way from having to ask Hermione to explain things. Harry won't be looking to Hermione to explain the pronunciation of "Leviosa" anymore, that's for sure.

:: But then, I am glad that Yates and company didn't include the Hogwarts ghost who flew around right after the battle in the book, chanting "Voldy's gone moldy, so let's have some fun!" That may have worked in the book, but it would have been an awful thing in the movie.

:: The film's overall look is fantastic, and I love how in the epilogue, the washed-out colors are gone and we're back to the bright palette of the first film. It's a key visual way in which the film shows us that the rightful order has been restored. I still think that a nice touch would have been to have Dudley Dursley show up on Platform 9.75, with his own muggle-born wizard kid in tow, but that's Rowling's fault, not the filmmakers. Oh well.

So...that's it for Harry Potter, I suppose. I do find it kind of saddening, but that's the great thing about stories, isn't it? They're always writing more. And hey! So am I.

(But really, Ms. Rowling? You need to start writing something, if you hadn't already.)

scrawled here by Kelly Sedinger at 12:17 AM

Ha! Your last line cracked me up, and I totally agree.