Some thoughts on a bit of pop culture stuff of late:

:: Here is actor Henry Cavill as Superman in the new movie about Superman, titled...Man of Steel. 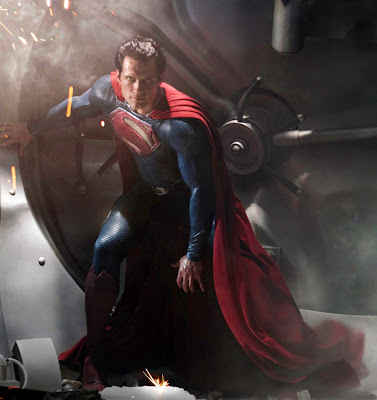 In all honesty, I'm just not very thrilled with this. He looks OK, himself, although I wonder why the "Superman Curl" is missing from the middle of his forehead. The costume, however, bugs me. Proportionally it looks fine, but I hate that texture. I wonder why Hollywood decided that superhero costumes need to not look like cloth anymore; this looks like it was sewn from the material they use to make basketballs. I'm also not thrilled with the washed-out colors. I hope the film doesn't look like this.

:: A sequel to Cosmos is on the way, apparently. I'm kind of glad to hear this, but any such project will be missing one key element: the poetical prose of Carl Sagan. The new show will be "hosted" by PBS science show mainstay Neil deGrasse Tyson. I hope this is done well, and doesn't pander at all.

Of course, there has already been a sequel to Cosmos, at least in print: Sagan's own book Pale Blue Dot. (I excerpted this book once, here.)

scrawled here by Kelly Sedinger at 6:23 AM