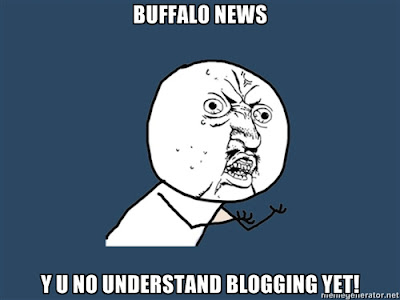 I know, two posts about the Buffalo News in one day...but seriously, BuffNews, what in the heck is this? Political reporter/columnist Bob McCarthy spends his last two grafs venting about a local blogger.

A local blogger named Chris Smith has been downright giddy in recent days criticizing The Buffalo News for reporting that SEIU Local 1199 is paying employee Jennifer Hibit to manage Poloncarz’s campaign for county executive. Around here, something unusual and of interest to voters makes a good story.

Some local bloggers receive money from politicians. The Politics Column does not — and that says it all.

Well, that's fascinating stuff, right there. You've got all the hallmarks of a newspaper reporter who still -- in 2011, ferchrissakes -- thinks that bloggers are just dirty little folk who pound out missives without fear of retribution, or something. If he'd had more column space, I'm sure McCarthy would have thrown something in there about Chris's mom's basement, his Cheeto-stained fingers, and his pasty-white complexion. (Full disclosure: I've been reading Christopher Smith for years. But I'm not affiliated with WNYMedia.net, I don't get paid by anybody to blog, I have never accepted money from a candidate, et cetera, yada yada yada, sotto voce, e pluribus unum.)

What's interesting here is that McCarthy completely ignores any of the substance of whatever it was that Chris Smith wrote and went straight for the character attack. Now, I don't know what the substance of whatever it was that Chris Smith wrote might be, because...well, I just don't care. What does interest me is a newspaper columnist ignoring criticism entirely and instead directly accusing Chris of receiving money from a local politician. Nothing like a little ad hominem in your Sunday reading, huh? This is not just weak tea, it's lazy tea. Weak tea is what you get when you don't steep the tea long enough. Bob McCarthy didn't even take the tea bag out of the foil package before throwing it into water he didn't bother to boil. That's how lazy this is.

One might wonder just how crap like this made it past the editors and into print, but then you realize that the Editor at the News is only just now getting up off her fainting couch after learning that people like the paper for the coupons. That shocking revelation must have her seriously off her game.

(Oh, and as to the "They only love us for the coupons!" thing? Well, I wonder why it is that Buffalo News readers might value the paper highly for its large amount of coupons and ad circulars. I wonder just why that might be....

Email ThisBlogThis!Share to TwitterShare to FacebookShare to Pinterest
Labels: Buffalo, Shaking My Head