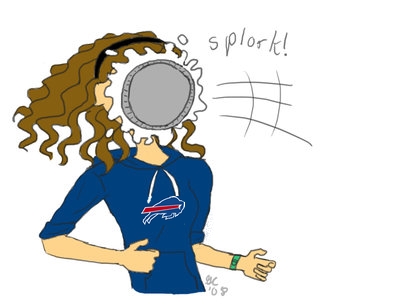 Packers 34, Bills 7. Another pie in the face for Bills fans, hooray!!

Mostly, though, it's fun when the game ends.

Yeesh, indeed. The Bills have been bad for the entire run of this blog (this is the ninth season during which I've been blogging), but right now? This is the worst they've been, that I can remember. They may even be worse right now than they were in 2001. I knew they were going to stink, but I had hoped for some small bright spot here and there. Not so much, though.

(But we can console ourselves by following the University of Washington's football team, right? Because that's where Jake Locker, the guy currently touted to be next year's #1 pick in the Draft, plays? Sure...and then we see that yesterday, against Nebraska, Locker went 4 for 20, 71 yds, 1 TD, and 2 INTs. Hope springs eternal!)
scrawled here by Kelly Sedinger at 6:05 PM

Email ThisBlogThis!Share to TwitterShare to FacebookShare to Pinterest
Labels: NFL 2010

With the way the Vikes have been playing, our matchup in week 13 could be a pretty well-matched game!