The other day, I posted a photo of a tool I occasionally use at work and solicited guesses as to what the tool might be: 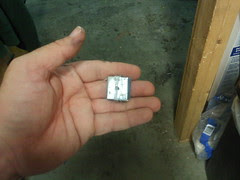 It's not a home-made plumb bob; I already have an honest-to-goodness plumb bob in my tool bag. Aaron identified what the tool is, but not what it's for. It is the magnet from a cabinet door catch, removed from its housing and tied to a length of fishing line. He suggested that I might use it to retrieve metallic objects from tight spots, and yes, I could use it thusly, but generally for that kind of operation I have a telescoping magnet that I use. Theoretically this doohickey could suffice to reach areas where my telescoping magnet isn't long enough, but I've never been in that kind of fix before. No, this gadget is for something else.

Here's how I use it: I pay out the line and then dangle the magnet at the end of about two feet of line. Then, holding the line up against a wall, I set the magnet to swinging back and forth, so its arc is parallel with the wall. And then I move the hand holding the fishing line around the wall while the magnet continues to swing. If it slows before I'm finished, I nudge it swinging again and keep moving the line around the wall. The idea is for the swinging magnet to track over as much of the wall's space as possible...until it stops, having encountered ferrous metal just beneath the surface of the wallpaper. What could that metal be? Why, a standard-issue drywall screw, which is fastening the drywall to a stud.

So, our mystery tool is a low-tech stud-finder. And believe it or not, I've had better luck using this tool than I've had using an electronic stud-finder. Sometimes I install things on our walls at The Store that require some heavy-duty fastening, and if I can accomplish this by sinking a screw into our metal studs, that's a lot better than using anchors that mar the walls. Therefore, occasionally I need to locate the studs, and this works beautifully (on regular old wallpapered walls, anyway -- I haven't tried this on the FRP-covered walls in our food prep areas yet). Cool, huh! So if you need a stud-finder for home use, give this trick a try. Magnetic cabinet latches only cost a few bucks, a lot less than the electronic stud-finders out there.

(No, I didn't think of this myself. I read about the trick in a magazine some months ago. I can't remember which magazine, though, but it was one of the "home improvement" mags I like to browse at the library.)
scrawled here by Kelly Sedinger at 8:27 AM

Very cool! I'll have to remember that trick. I have a pretty good stud finder, but the battery's usually dead.

I can't believe you also posted about a stud-finder! That's too funny. Thanks for the tips.
xoRobyn