:: Cats as Marvel characters. Great stuff! This one was my favorite: 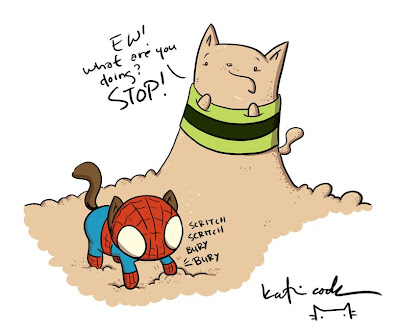 :: I've never been one to favor the miniatures-and-models era of film visual effects on some kind of a priori basis, under the assumption that something made physically by hand is inherently superior to something made virtually on a powerful computer. That's not to say that I don't love great physical visual effects work, because I do. But I don't share the "Computer effects, ewwww!" attitude that many geeks espouse. I do think that computers make it easier to do bad and unconvincing effects, but believe me, I've seen tons of bad and unconvincing effects from the miniatures-and-models era. (As big a James Bond fan as I am and have been for years, boy howdy are there some bad visual effects in the Bond films. The space sequence in Moonraker is laughable at times, and Atlantis rising from the sea in The Spy Who Loved Me just screams out "This is a tiny model!")

I think that the reason CGI effects tend to be disparaged isn't because they're bad, but because they allow filmmakers to go for shots that, ultimately, are pretty ill-conceived. A shot that's a bad idea would be a bad idea, whether the effect is physical or CGI. The ease of CGI, I think, greatly undermines the fact, underscored by hundreds of years of art history, that less is often more. Jaws is often lionized as a film where suspense is created by withholding its visual impact until the very end; you don't see the shark in any kind of good, establishing way until the best possible moment ("You're gonna need a bigger boat"). What's forgotten is that the reason the film was made this way wasn't because of any great "less is more" philosophy on the part of Steven Spielberg; the film was made this way by necessity because the physical shark model just wasn't working. Had "Bruce the Shark" worked better, it's almost certain that the film would have included a lot more shots of the shark, and probably earlier on.

So what's the point here? Well, when you get a chance to pay some attention to "that man behind the curtain" on one of the great visual films of all time, well, how can you resist? So go check out Douglas Trumbull discussing the creation of the vast industrial cityscape of Blade Runner.

:: This fellow makes lightsabers. These are probably the best that are out there, aside from the real thing, if anyone ever manages to invent one. 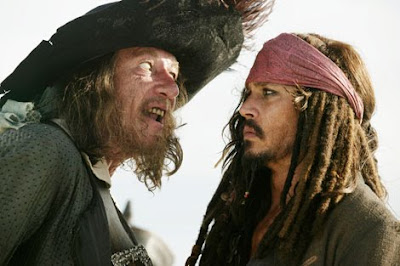 Drink up me hearties, yo ho! ARRRRRRR!!!
scrawled here by Kelly Sedinger at 12:01 AM