The Behaviors of Mr. Costanza 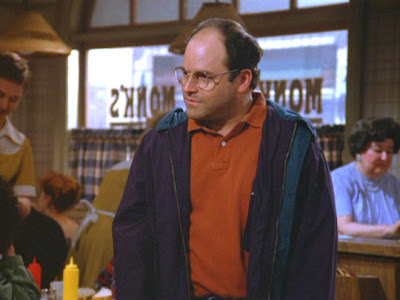 I've been a fan of Seinfeld for years – even the much-lamented ninth and final season. I didn't even hate the series finale, even though it wasn't nearly as funny as it should have been; I thought it was a nifty idea to wrap up the series, even if the execution wasn't what we might have hoped. I'm not sure I can name my favorite character, but there's a good chance that it would be George.

Why George? Well, everyone's there for a different version of insanity. From Elaine, we get female insanity; from Kramer, we get pure insanity that's not really grounded in any form of reality. From Jerry we get pure narcissism, and from George, there's the insanity that comes from being an eternal loser. I just tend to find the bizarre things that befall George, and the even more bizarre ways he responds to them, to be the heart of the show's humor. George is a guy who always mistakes opportunity for a chance to remain inert, and vice versa; so consistent is George in his instincts always being wrong that one of the show's better episodes actually had George consciously choosing to do the exact opposite of what his immediate instincts called him to do, with George tasting actual success as a result.

Throughout the show's run, George Costanza engaged in one bizarre act after another, suggesting an interesting exercise of the "What would you do?" variety. Let's examine some of these!

Scheme to see a woman naked after she saw me naked, and laughed.

No, I would not do this. It just can't work out the way you want.

Failing to see said woman naked, trick her into eating something that's against her religion.

Eat something that was sitting on a piece of paper on the top of the pile of items in a garbage can.

Heavens, no. I've had many a moment of "Wow, why would someone throw that out? It's perfectly good!" But once it makes physical contact with something else in a garbage can, that's it. It's garbage.

After my parents are mis-informed of my "death", allow them to keep thinking I'm dead for a little while because "they need the break".

Well, my parents aren't lunatics, so clearly, no.

Try to sneak a loaf of marble rye into my future in-laws' home after my parents took the original marble rye home with them.

You know, I always felt bad for George in this spot. He's trying to cover the fact that his own parents are lunatics. If I had George's parents, I just might try something odd like this.

Maybe it sounds odd coming from an unrepentant overalls-lover like myself, but the only time I ever wear sweat-pants in public is if I'm out for a walk or something like that in cold weather, or if I have to go out fairly late to pick something up from a store – like maybe if The Wife gets home from work and she's sick and we're out of cough medicine, or if I'm cooking dinner and I discover that I'm missing a key ingredient. But really, in cases like those, I'm just as likely to throw on the overalls as sweat pants. In college, sweat pants were a big part of my wardrobe, but not so much these days. I think I only own two or three pairs, each of which is more than ten years old.

Push women and children and elderly ladies with walkers out of the way in my haste to get to the door when I smell smoke and think there's a fire.

Gosh, I hope I'm a better person than this!

Scheme to get caught cheating on my current girlfriend, who refuses to break up with me.

This was one of my favorite George storylines. I wouldn't do this, but this was really funny.

Obviously not...but I keep meaning to ask my electricians at work if it would be possible to do what George wants!

(See, he and Jerry visit their old high school pizza place, where George discovers that the old Frogger machine in still there, sporting his fifteen-year-old high score. He decides he wants to buy the machine and take it home to preserve the score for all time, but Jerry points out that as soon as he unplugs the machine, his score will disappear. So George contracts some electricians to move the game without losing power. His scheme fails, obviously, because it's George, but I've always wondered if this could be done!)

Try to arrange my life so my significant other never interacts with my close friends.

Another classic episode that highlights the futility of George's existence. Would anybody other than George Costanza ever even try this?

Hire a carpenter to modify my desk at work so I can sleep underneath it.

What a great idea! What a great, lazy idea! I love this idea! And with my growing carpentry skills, I might be able to do this myself!

Fake a disability to get a job.

Never. Even though it backfires on George.

Try to manipulate my co-workers into giving me the nickname "T-Bone".

This was funny just because it was so gonzo on George's part. It would never occur to me to try this.

Eat a candy bar with a knife and fork.

I loved Jerry's response to this one: "Yeah, this plan can't miss." You could feel the disaster unfolding. (Of course, this one is completely out of date now, in the age of digital photography.)

No! I can't stand an overly thick wallet. I cull it every so often.

I honestly think this was a pretty savvy move on George's part!

Well, The Wife didn't drop dead from licking them, so I guess I did OK on this!

This is unlikely to come up in my life.

Get caught by my mother with a copy of Glamour magazine.

Erm...no. That's all I have to say about that.
scrawled here by Kelly Sedinger at 10:22 AM

George was the best.

I once knew a guy who wanted to keep his social life completely apart from his girlfriend/wife. He was really weird.

I could also agree with Kramer being the best, just because he was so unpredictable (except for the physical comedy which never got old to me).