A while back I decided that instead of monitoring my body-reshaping progress by the use of a scale, I'd use the metric of the shoulder straps of my overalls. Well, today I reached for the "official" pair I've designated for this odd exercise, and sure enough, I had to draw in the straps by about an inch. Here's where things stand right now: 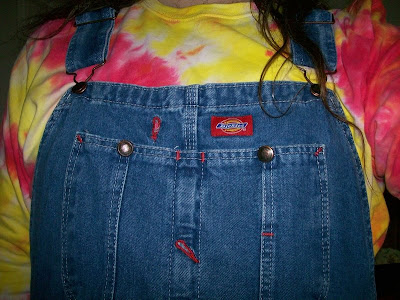 That doesn't seem like much, but another development is that I can now fasten the upper set of side buttons on this pair without sucking my gut in too much: 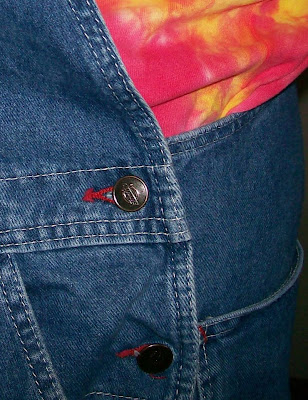 I'm also getting stronger, slowly and steadily; I have increased the weight on every weight-training exercise I do several times since I started the program back in January, and I am noticing some pleasing curvature to my upper arms and my legs. That's a deeply satisfying feeling. I can't wait to be able to compare myself in January 2009 to the one who showed up at the Y in January 2008, and so on.

In the course of my renewed devotion to health, I remembered a website I used to follow back when I last embarked on a weight loss program. This was back in the waning days of 2001, starting a month or so before I launched this blog and continuing for more than a year afterward, a period over which I lost slightly more than fifty pounds. The site is called One Phat Man, and it's the self-told story of a guy who, through changes in diet and exercise, took himself from over 350 pounds to down near 200. (He hasn't updated in a long time, but his archives are all there.) It was quite a story, and I found it pretty inspirational at the time: there was no gimick, no "take this powder and swallow this pill" stuff, nor any "Stick to this hyper-regimented diet plan for eight months to lose weight" rigamarole, nor any "Eat nothing but protein, that's the ticket!" weirdness: just a simple message that basically boils down to "Choose which life you want to lead, and then live it." I love that message: sure, it takes work to get healthy, but if it really matters, it won't really feel like work. He also has the ideal response to the whole "But when your program ends you'll just gain the weight back" arguments: If you continue to do the things that transformed you, you will continue to stay transformed. That's exactly right.

That's what I'm doing, as well. Am I eating more protein? Yes I am, because I've learned that it requires more energy from the body to digest, and because I'm not so much concentrating on losing weight as removing fat and adding muscle at the same time. I'm also eating a lot more salads; I've ditched all dressings except for extra-virgin olive oil and balsamic vinegar; I'm eating breakfast regularly (usually a whole-grain, high-fiber cereal like shredded wheat with a half-cup of blueberries and a glass of OJ). I'm making my lunch to take to work every day, which is both healthier and much less costly.

But there are things I'm not doing. I'm not eliminating things from my diet completely. Once a week I skip my usual mid-morning snack of yogurt-and-granola and substitute a coconut donut (pure heaven). I haven't cut back at all on my coffee consumption. I'm eating more fish; we keep frozen tilapia filets around as a staple now (just thaw, dust with flour, and then pan-fry in a bit of seasoned oil). As healthy as we're trying to eat now, though, we still go out to the Chinese Buffet once or twice a month; last week we drowned our sorrows in maple syrup; the other night neither The Wife nor I felt like cooking, so we got a pizza and breadsticks from Capelli's. I still eat chocolate, but in much smaller quantities. I'm discovering that I can feel satisfied with just three gingersnap cookies, as opposed to grabbing half the package. I have a box of Thin Mints that I've been working on for a month now; time was when a box of those would be gone in a matter more of hours than days. I've vastly reduced the amount of pop I drink each week, but I still grab a bottle of Cherry Coke for Saturday afternoons, which I drink in the evening after putting the groceries away (just finished it, whilst writing this post) and we still enjoy the union of Caffeine-free Pepsi and spiced rum. For snacking, I keep apples around, and peanut butter; mixed nuts and pistachios. Crackers and potato chips? Not so much. Tortilla chips, though? Still here, just not consumed all that often.

That's how I'm doing it, a little at a time. Onward and upward. Or downward, as the case may be.
scrawled here by Kelly Sedinger at 8:52 PM

Email ThisBlogThis!Share to TwitterShare to FacebookShare to Pinterest
Labels: Less of Me, Overalls

Congratulations on your progress! I admire your wisdom regarding life choices and your sensible approach to improving your health.

This is great! I dropped 30 lbs between Oct-December doing much the same. I've maintained at that point for almost four months now. I'm about ready to begin working toward losing the next 30. I try to be pretty mindful that my goal is to NOURISH my body, not deprive it. When I am hungry, I eat. But when I am no longer hungry I stop. Hard to break years of training to clean the plate, or to eat because the clock says its time to eat, or eat to be polite because someone is offering it, or eat for emotional reasons, comfort, or pure recreation. Food is fuel. But I know I've certainly used it in a lot of oter ways.

Good luck on your continued efforts!

way to go, Jaq! keep up the good work!