Sorry about the recent silence, folks, but real life has been hectic of late and not terribly conducive to blogging, for many reasons. This may continue for a few more days, or it may not. With me, you never know. Heh heh heh. Anyhow, here's a bit of what's been going on:

:: We, the Family and I, spent a few hours last weekend at Knox Farm State Park in East Aurora. If you're looking for a great place to have a picnic lunch and then a nice walk with your clan and/or loved ones, this is yet another of the Buffalo area's great places to do it, and it's free to get in. I can't recommend this place highly enough. Add it to the list of great places in this area that you don't have to pay to get into. I put some photos up on Flickr, but here's one that The Daughter took of The Wife and I. My hair's all messed up there, but note that I'm not wearing overalls. It was pretty hot that day. 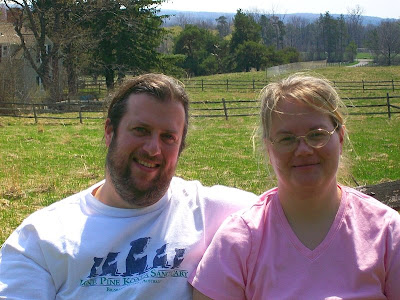 :: I've been going through the archives of xkcd, one comic at a time, and bookmarking all of the ones that I particularly enjoy in a special folder. Why? Because xkcd rocks, that's why.

I'm especially tickled that I get the joke on this one:

:: I'm slowly converting Casa Jaquandor into a home completely illuminated by compact fluorescent light bulbs. I bought my first CFL bulb way back in 1992, for my main lamp in my college room, and I remember that one being fairly harsh in tone, but they've improved immensely since then, and aside from the waiting for them to warm up to full brightness, I don't miss the incandescents one bit (except for the two lamps we have that can't be converted, due to the types of bulbs they require). And really, that wait for full brightness can be a nice thing, actually; a good example thereof is when one uses the bathroom in the middle of the night. At that point it's nice that one can turn on the lights without becoming blinded.

:: Jesse L. Martin's off Law and Order. I don't really care about L&O, but I like Martin a lot. For me, his most memorable turn is in the X-Files episode "The Unnatural", where he plays a baseball player in 1947 who turns out to be an alien. I tried finding my favorite clip from that episode on YouTube, but no luck. (It's a nice dialogue scene that takes place on the team bus, and ends with Martin's character, Exley, singing a spiritual with some of his teammates. I love that episode.)

:: Does anybody know of any online musical notation applications? I just want to plunk down some notes on a stave and save the results.

:: Mary Kunz Goldman, classical music critic for The Buffalo News, has a blog. I'm not the biggest fan of hers; her writing style is, shall we say, a tad mockable -- but hey, it's a new voice in the Buffalo Prefecture of Blogistan, and I've always found MKG at her best when she's writing about classical music.

:: Shakespeare's birthday was the other day. In a couple of hundred years, this will be a major holiday in the Klingon Empire.

:: In a boring note from mundane existence that nobody will care about, I have now decided that I like cottage cheese. Yes, this was a lame attempt to pad out an already boring post, so I'll leave off there. Posting will probably be light for another few days, but you never know.

The two of you appear to have not aged a bit since I last saw you.

Wow, I didn't recognize you with your hair pulled back and no overalls! That's a nice photo, and it looks like a wonderful place to spend a peaceful afternoon.

You JUST figured out you like cottage cheese? My wife's been mocking me for years because I think cottage cheese goes with just about everything!

I didn't know that CFLs get brighter as they warm up - I never left them on that long, being disgusted with the light output.

Maybe I'll try again. Maybe I should go for brighter rather than the same wattage. Maybe.

Most CFLs come with a brightness indicator on the packaging, telling what the CFL bulb is equivalent to in terms of a normal incandescent. Mostly it seems to be a factor of four, roughly; 15w CFLs yield comparable light to a 60w incandescent. Be sure to get a good brand, though; cheap CFLs tend to last less long and have harsher light. I'm buying Philips bulbs exclusively, and once they warm up, I find their light indistinguishable from incandescents.

Heh! Actually, in warmer weather I never wear them; they're pretty much a fall and winter thing for me, and even then I don't live in them. I've adopted them more as an affectation for this blog than as a constant thing for life.