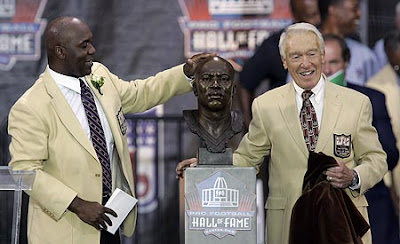 I could never decide, way back in the days of the Buffalo Bills romping through the AFC every year, which was my favorite player. Sometimes I'd name Jim Kelly; other times I'd name Thurman Thomas. Bruce Smith was always right up there too (although his tendency to get pissed off about his money every other year used to annoy). Andre Reed and James Lofton. Kent Hull. Steve Tasker, of course. Darryl Talley. Cornelius Bennett. Mark Kelso, who wore this gigantic helmet (necessitated by concussions) that made him look like a bobble-head when he was on the field. Phil Hansen.

Those were the Bills teams I watched from afar, while I was in college in Iowa; those teams were the little piece of "home" I took to a place where knowledge of New York geography was such that people apparently thought that Buffalo was just a little bit farther outside New York City than Yonkers. It seems odd to me that next year, 2008, will be the twentieth anniversary of when the Bills first rose to prominence (AFC East champs in 1988, with the season ending in a 21-10 loss to the Bengals in the AFC Championship Game), and that we're just three years away from the twentieth anniversary of the Bills' first Super Bowl appearance (lost 20-19 to the NY Giants). Wow.

Anyway, here's how I always remember Thurman Thomas: cutting back with effortless ease as a bunch of Miami Dolphin defenders gaze, less than lovingly, at the back of his jersey. 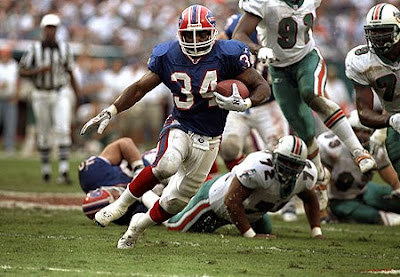 Thanks for the memories, Number Thirty-Four!
scrawled here by Kelly Sedinger at 12:18 PM