:: It somehow escaped my notice until just a few days ago that one of the Buffalo News's new blogs is devoted to poetry. That's pretty cool.

:: Good article in the News today by Larry Quinn, one of the big wheels behind the eternal project of developing Buffalo's waterfront, whose big thing right now is the Bass Pro project. A sample:

They want to fight about where the plaza ought to be, as if there is a substantial difference between the new and old location.

They don’t want parking, as if any project could conceivably be successful without it.

They don’t want big-box stores, as if reconstructing the Central Wharf is analogous to erecting a single-story cinder-block building in a sea of asphalt.

They think the project costs the public too much, as if leaving the ground vacant for the last 70 years didn’t cost us millions upon millions. They ignore the tens of millions of dollars to be generated in sales and property taxes and the economic impact of new jobs.

They don’t like the process; we apparently didn’t consult with the “right” people or the so-called business leaders who shoot arrows while hiding behind a veil of anonymity and offer nothing but criticism.

And on and on we go. With all due respect to Esmonde and Company, they really are missing the point.

What I never get is the whole objection to parking garages. It's true that garages in Buffalo tend to be giant structures of ugly gray concrete, but that's not true of other places. I sometimes wonder if people who complain about parking garages have ever been to, say, Toronto, where there are lots of parking garages that are virtually invisible as such from the street. Eaton Centre's a good example, and I recall another such example in the vicinity of the Royal Ontario Museum. They don't have to look like this: 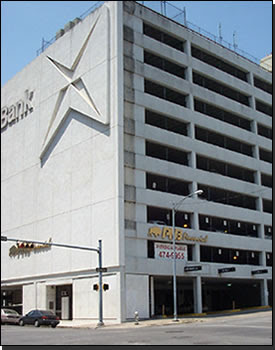 :: I have a new review up at GMR of Caitlin R. Kiernan's novel Daughter of Hounds. Short version: the book is excellent.

The problem is not the ugliness, per se-- it is really more that the street life disappears around parking structures. There is no pedestrian activity, and a big block of space becomes the urban equivalent of a desert. Worse, actually-- the lack of activity can make these areas more dangerous. We have plenty of parking-- and plenty of arid desert in downtown Buffalo