Time for another quiz, via Tosy (or was it Cosh?):

What was the first recorded music you bought?

The soundtrack to The Empire Strikes Back. Holy crap, I played that thing into the ground over the next nine years or so. I played it so much that it has taken years of listening to subsequent CD releases to get to the point where I no longer hear the music the way that it was edited together for that album. (The tracks were not in film order, and some bits of score from different scenes were edited together into longer tracks.)

The 4-disc set of the scores to the Karate Kid movies, music by Bill Conti. Wonderful 80s cheese for the most part, but there's one track in The Karate Kid Part Two (underscoring the tea ceremony between Daniel and Kumiko) that I consider to be among the finest bits of love music in all films.

What was the first "professional" music show you ever went to?

The Buffalo Philharmonic Orchestra, when I was ten or eleven. My sister was taking French horn lessons from a then-member of the orchestra. I don't recall what was on the program, but Julius Rudel was the conductor, I believe.

I haven't been to any live music in so long that it's really very depressing.

Lord, I can't name one. Truly. The LOTR scores? Geez, I dunno.

Album title? Maybe Fire in the Kitchen by the Chieftains (amazing album, by the way). Song title? I'll go with "Seven Spanish Angels". A song with a title like that can't help but be gorgeous.

What's your favorite album art (include an image of it if you can)?

I always loved this cover to the Solti/VPO recording of Das Rheingold: 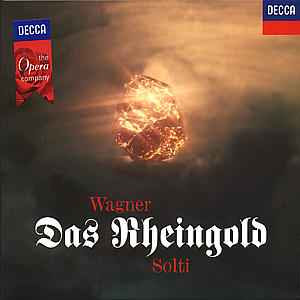 The version I own has this dull cover: 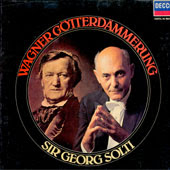 (OK, that's for Gotterdammerung, but the art's the same, just with the right name for the opera.)

Ideal choice for a karaoke song?

Song you don't like that WILL NOT LEAVE YOUR HEAD if you hear it.

"Hey Jude". I absolutely detest that song. And yet if I hear it, I end up hearing that interminable "Na na na nanana naaaa..." crap in my head for hours.

CD. I like having a physical object, and I'm not wild about the idea that if your hard drive goes kerblooey, there goes your music.
scrawled here by Kelly Sedinger at 8:07 PM