For all the dreamy talk about electronic books and how some day when the Technowhizkids figure out how to make a "screen" that has about as close a tactile and visual appeal to actual paper all the traditional bound books will go away and we'll all be carrying our entire libraries with us wherever we go -- and I have to admit that part of me finds that dreamy talk alluring -- there are things about physical books, tactile books, real books, books-as-objects, that won't ever be replicated by ePaper or the iTome or the CyberCodex or whatever it is we're going to call it.

Once every quarter, my local public library holds a book sale, with the most recent one being just this past Saturday. This book sale always yields an impressive bounty, on several fronts: I can load up on the kind of thick, breezy epics that The Wife likes to curl up with in bed at the end of a long day. I also snatch up a number of books for The Daughter, almost always finding copies of things she's going to own someday anyway, like that Richard Scarry book about cars and roads (can't recall the title right now) and her copy of Charlotte's Web, which I just got the other day.

And for me? Past book sales have brought hardcover copies of things like Love in the Time of Cholera by Marquez, The Ascent of Man by Bronosky, Cosmos by Carl Sagan, The Discoverers by Boorstin, and more. It's a great way to fill out the "classic lit" section of my personal library, too: I own a very old copy of Elizabeth Barrett Browning's complete poems, an equally old copy of the Oxford Book of English Verse, and so on.

It's always interesting to me to note a certain dichotomy at the library book sale between old copies of books everybody knows and old copies of books that nobody knows. For every copy of Charlotte's Web and Johnny Tremain (which I've actually been wanting to re-read, and there it was last Saturday!), there will be a copy of a bestseller from yesteryear that is just gathering dust. The cover copy of these books will often say something like "The next great work from the author of _____!", with _____ being yet another unfamiliar title. Here are authors who may have thought that their books would outlive them and carry their names into memory, and yet, here they are being purchased by people who want nothing more than to spend a quarter on a cheap, quick read. Don't think for one second that I haven't sadly envisioned, on some library table many years from now, a battered and yellowing copy of some novel bearing my name, being picked up by some person, perused for a moment or two, and then as likely as not being put back down again in favor of some other book with a more appealing cover.

I have to admit that book sales are the main vehicle by which I exhibit any real interest at all in antiques. I enjoy antique stores, mind you, but more as walk-through experiences than anything else, and I rarely feel any desire to buy anything from them. An old chair or dish just doesn't have the same allure for me that an old book does. It's easy to sit in a chair. There's nothing terribly profound about the act of sitting in a chair, and even if the chair is a hundred years old, I don't feel any kind of historical connection with the previous people who might have sat in it before, any more than I feel any connection with the people who have previously slept in hotel rooms I've booked or seats at a venerable old restaurant.

But books? Ah, there's something else: when I read a very old book, I'm not just in that kind of "readerly communion" with the author, but also with the other people who have read it. The ideas being expressed in those pages, or the tales being told or the pictures being shown, are entering my mind in just about the same way that they did for someone many years before. I don't think that kind of communion, a communion between readers, will be possible with the CyberCodex.

And then there are the physical reminders of all this that are only possible with very old books.

One of the volumes I bought the other day is a hardcover edition of Tennyson's Idylls of the King. I already own the Idylls, of course, but I couldn't pass up this lovely little hardcover, and I grabbed it and put it in my stack on sight. Only when I got home did I open it up, and find that the book was an edition specifically intended for school students. The student to whom this copy of Idylls of the King had been issued had dutifully signed the frontispiece: 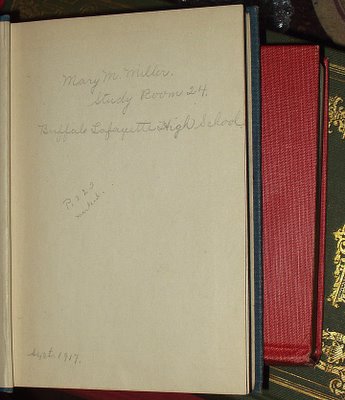 And she dated it: September 1917. Almost eighty-nine years ago, this book that I grabbed off a stack of other dusty and forgotten volumes was given, presumably new, to a young woman named Mary M. Miller for use in her high school class. (By the way, her school, Buffalo Lafayette, is still there.)

Further flipping through the book, I found scattered marginalia throughout. The marginalia comes in spurts, with lots of it during certain passages and then none at all during others; this makes me wonder if Miss Miller's class didn't actually read the entire Idylls but only parts of it. Miss Miller, I also note, had lovely penmanship.

Finding marginalia in books like these is not uncommon, but the combination here of factors -- the years between Miss Miller and myself, the Buffalo location, the fact that Tennyson is my favorite poet -- made it feel more profound than usual. But the real whammy was still to come: for while finding marginalia is common, finding note cards in the book is decidedly less so.

I found this card, tucked somewhere in the middle of the book: 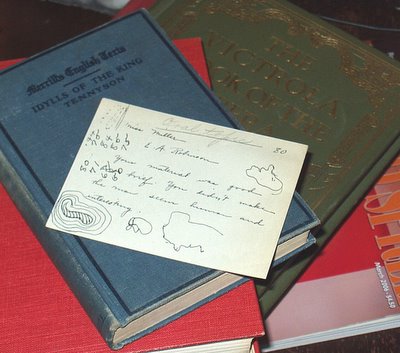 In pencil at the top, it reads: "Oral Topic". Then, in pen, there is a note in a hand that isn't Miss Miller's, and addressing her:

Your material was good
and brief. You didn't make
the man seem human and
interesting.

I have no idea what the doodles are, nor do I have any idea what those numbers represent -- page numbers, perhaps, or line numbers within the Idylls. I think the note probably comes from Miss Miller's teacher, but the reference to 'E.A. Robinson' is slightly baffling. 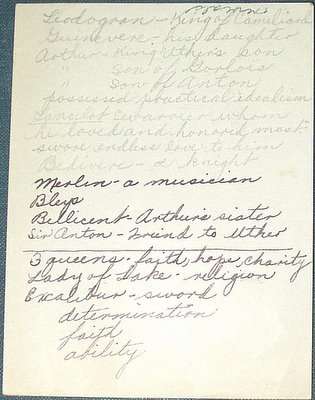 So on one side of this card, there are notes about the book in which I found it; on the other, a probable note from a teacher about something else. I can only surmise that E.A. Robinson is actually American poet Edwin Arlington Robinson (1869-1935), and that this card was first a note of feedback for Mary M. Miller regarding an assignment on Robinson which she then used, on the reverse, as a place to write some notes she'd taken on Idylls of the King.

So this little book that I picked up at the library book sale has given me a small, fleeting glimpse into the life of a high school student from almost a hundred years ago.

As I noted above, finding margin notes is common, but finding cards like this is not. Cards tend to fall out of books the more they're handled, and for a card like this to have remained in this book until I found it makes me wonder if anybody has handled this book at all since Miss Miller did. The likely chain of events is that Miss Miller toted this little volume around all her life, for whatever reason -- maybe on her shelves, maybe at the bottom of a box of old school memorabilia -- until some descendent of hers found it and decided to take it to the book sale.

Yes, someday I'll be able to take my entire library with me when I travel. Someday I'll be able to read just about any book ever written. Someday, "out of print" will be a virtually unthinkable concept. But also, someday I won't be able to share the exact book that someone before me read, and I won't be able to find some long-forgotten set of notes scrawled in haste on the back of a teacher's note, lurking somewhere amongst the aging pages. An inevitable trade, of course, and certainly not a trade worth impeding upon the march of technological progress, but still: nothing is ever gained that something else isn't lost.

(Of course, the real problem with the inevitable CyberCodex would be solved if they could figure a way to make it smell like an old book.)