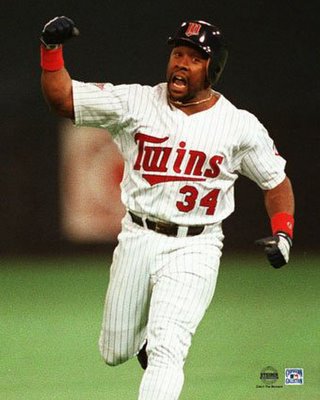 Like many a baseball fan, I keenly remember that 1991 World Series -- each game won by the home team, four games decided in the final at-bat, a bunch of 1-0 final scores, a ten-inning Game Seven that ended with Gene Larkin's deep single to left, and Kirby Puckett's game-winning shot in extra innings (11th or 12th, I think) off Charlie Leibrandt.

When Puckett hit that ball, The Girlfriend (who eventually became The Wife) and I were driving back to college in Iowa from Chicago. Long drives, at night, listening to late-season or postseason baseball on AM radio are a supremely underrated pleasure, and Kirby Puckett gave me one of the best.

I got to see him play on my twenty-first birthday. It was a 9-2 Twins victory. I don't recall any Puckett heroics at the plate, but he did run down a long fly to center. Dammit, he was good. His career -- and now his life -- were too short.

So long, Puck. Enjoy playing in my dream outfield, next to Roberto Clemente.
scrawled here by Kelly Sedinger at 9:23 PM