The word is given: Warp speed. 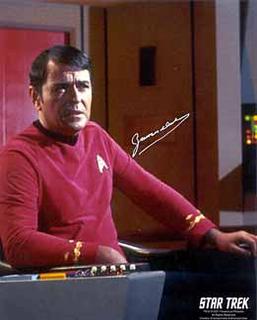 Everyone knows already, but James Doohan -- a.k.a. Lt. Cmdr. Montgomery Scott, chief engineer of the USS Enterprise -- died today. He had a good, long life and was by all accounts a warm and gregarious individual. I can't necessarily say that I'll miss him, since the TOS crew left the scene years ago -- better to say that I do miss him, I suppose.

I always thought that ending Star Trek VI: The Undiscovered Country with the animated signatures of the actors and actress of the TOS crew was the classiest ending to a movie I've seen. If I had any Scotch on hand, I'd raise a dram to the memory of James Doohan and his signature role -- ironic, I suppose, since Doohan wasn't Scots himself. So maybe a Yuengling's will suffice.

And yes, as the resident "miracle worker" at The Store, I do in fact multiply all of my repair estimates by a factor of four.
scrawled here by Kelly Sedinger at 9:08 PM