[Updated below, with the solution!]

Anyway, I have yet to come up with anything close to a genuine stumper in this series...but let's try again, shall we? 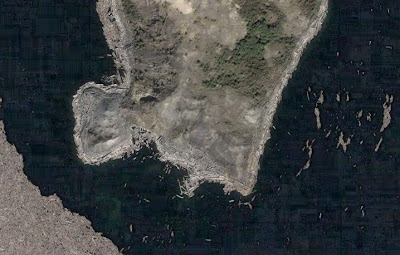 UPDATE 6-10-07: Well, three days have passed since I posted this, and nary a guess in sight, so maybe a hint is called for. Here it is: had Google been able to take a photo of this location say, thirty years ago, it would have looked significantly different.

UPDATE 6-12-07: Hmmm, still nothing. Here's another hint: scientists were amazed to discover life in this body of water so soon after the event that made this place look the way it does.

UPDATE II, 6-12-07: We have a winner! It is, as Paul tells us, Spirit Lake, which is located north of Mt. St. Helens in Washington State. Here's an overall photo of the whole area: 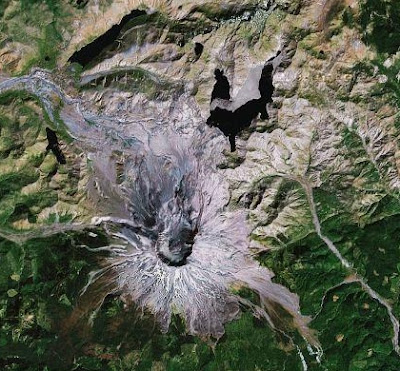 And here's the Google Maps location.

All that debris that in my original photo looks like a bunch of matchsticks dumped into a rain puddle? Those are trees that were leveled in the stunning blast of Mt. St. Helens on May 18, 1980. Twenty-seven years later, and the lake is still partially covered with debris.

In the second hint, I point out that scientists discovered life in the waters of Spirit Lake far earlier than they ever thought possible. Since Spirit Lake pretty much lies in the direct line of fire of the eruption of that day -- notice how it's just off the direction of the clear slope of that day's blast -- it was literally sterilized by the heat and violence of the cataclysm. However, Spirit Lake today is home to fish.

My next hint, had it remained unidentified another day, would have been that so violent was the geologic upheaval of the May 18 eruption that today, Spirit Lake's bottom is actually at a higher altitude than its surface was before the eruption.

Always remember, folks: this planet can shrug us off anytime it wants to!

(Also remember, Buffalonians: shoveling six inches of snow is easier than clearing one's driveway of one inch of volcanic ash. As my family lived in the Portland, OR area when St. Helens was going through its 1980 eruptions, I know whereof I speak!)
scrawled here by Kelly Sedinger at 8:34 PM

This is tough. Unless the quiz master has flipped the photo, I'm pretty sure it is north of the Tropic of Capricorn. So, you know, that narrows it down a little.

Hmm, looks volcanic - is it somewhere off the coast of Iceland or something?

I can't believe it! I JUST found it and was about to post...grrrr.