Why is she so hung up on Ryan, anyway? He's such a douche! 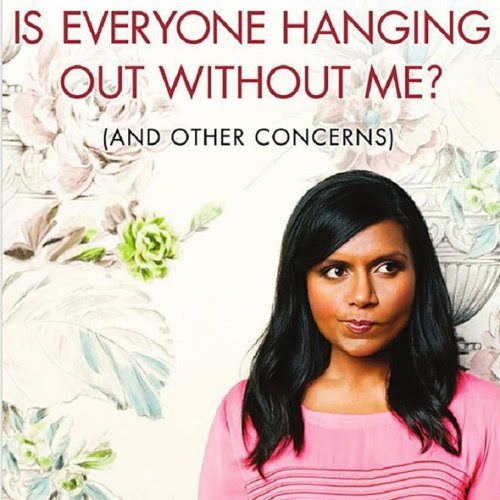 If you watch The Office without paying attention to the credits, you might assume that Mindy Kaling's sole purpose on the show is to play Kelly Kapoor, the materialistic 'office girl' who is more interested in appearance and various superficialities than in professional accomplishment. But if you do pay attention to the credits, you quickly discover that Mindy Kaling is the complete opposite of Kelly Kapoor. As a writer, occasional director, and listed producer, Kaling is one of the main creative contributors to The Office. And now she has a new book, called Is Everyone Hanging Out Without Me? (And Other Concerns).

This delightful book is part autobiography, part musing on the current state of entertainment, part musings on romance and dating here in the 21st century, and...well, the book reads simply like the conversational thoughts of a person who leads an interesting life and has interesting things to say without having led so interesting a life as to be completely intimidating. Is Mindy Kaling the 'girl next door'? Sure...if the girl next door is a hard-working, smart, and pretty woman who has a number of impressive talents.

Here is Kaling describing some of the types of characters you will find in a typical romantic comedy these days:

When a beautiful actress is in a movie, executives wrack their brains to find some kind of flaw in her that still allows her to be palatable. She can't be overweight or not perfect-looking, because who would want to see that? A not 100-percent-perfect-looking-in-every-way female? You might as well film a dead squid decaying on a beach somewhere for two hours.

So they make her a Klutz.

The 100-percent-perfect-in-every-way female is perfect in every way, except that she constantly falls down. She bonks her head on things. She trips and falls and spills soup on her affable date. (Josh Lucas. Is that his name? I know it's two first names. Josh George? Brad Mike? Fred Tom? Yes, it's Fred Tom.) Our Klutz clangs into Stop signs while riding a bike, and knocks over giant displays of expensive fine china. Despite being five foot nine and weighing 110 pounds, she is basically like a drunk buffalo who has never been a part of human society. But Fred Tom loves her anyway.

The smart and funny writer Nathan Rabin coined the term Manic Pixie Dream Girl to describe a version of this achetype after seeing Kirsten Dunst in the movie Elizabethtown. This girl can't be pinned down and may or may not show up when you make concrete plans. She wears gauzy blouses and braids. She decides to dance in the rain and weeps uncontrollably if she sees a sign for a missing dog or cat. She spins a globe, places her finger on a random spot, and decides to move there. The ethereal weirdo abounds in movies, but nowhere else. If she were from real life, people would think she was a homeless woman and would cross the street to avoid her, but she is essential to the male fantasy that even if a guy is boring, he deserves a woman who will find him fascinating and pull him out of himself by forcing him to go skinny-dipping in a stranger's pool.


And thanks to Mindy Kaling, I now desperately want to see the movie Darling, which has not been made yet, but would tell the story of Peter Pan from the viewpoint of the Darling family's alcoholic father. That movie needs to happen, dammit!
scrawled here by Kelly Sedinger at 8:59 PM

And in unrelated news, Kate Upton is considered fat, which I mention here only to note that there are always people tearing down women.