I haven't blogged about food lately, which is kind of dumb, since I've had some good times with food lately. Here are a few items:

::  I've used my wok more the last few months than in the first twenty years I owned it. (Wow...I've owned my wok for 20 years. The only reason I might see to get another one is to get an all-metal one, as mine has wood handles. But that's low priority. I love the wok!)

So far I've done mostly stir-fries with it, although in the past I have used it for deep fat frying. I made a wonderful spinach fried rice last week, from a recipe in a Martin Yan cookbook (Chinatown Cooking). Here are the results: 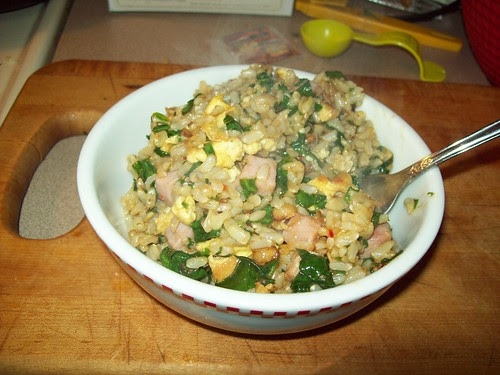 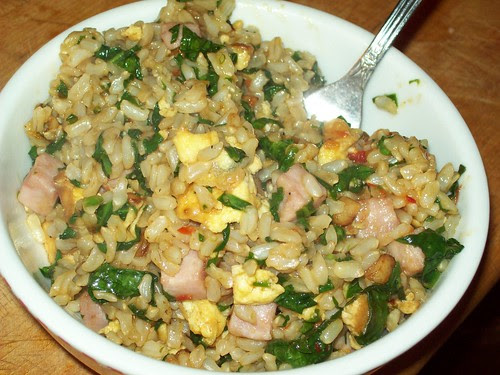 The only problem I had with this dish was that the result was a tad too salty, but that's easily corrected next time out. I could very easily live on fried rice. (Well, rice in general.) The only other change I made is that I used brown rice, instead of long-grain white. I know, the white rice is what you're supposed to use for fried rice, but I really prefer the flavor of the brown. Plus, it's better in terms of nutrition.

(Funny thing about that Martin Yan cookbook: I bought it at The Store, because I like Martin Yan and I wanted a new Chinese cookbook. When I got it home and thumbed through it in more detail, I found, inside the frontispiece, that it had been signed by Mr. Yan. He signed it, "Good food, Good wine, Good health -- a wonderful life!" How cool is that!)

:: The biggest food development at Casa Jaquandor was my Father's Day gift from The Wife and The Daughter: a new Weber grill, to replace the old one that served well through the years but rusted away (partly due, I must admit, to my somewhat lackadaisical care for it over the seven or eight years we owned it). The new grill has a 22.5 inch cooking surface, with a grill whose side panels are hinged so that I can add charcoal to the fire when slow-cooking something or when cooking with indirect heat. And it has a nifty pan beneath the kettle to catch ashes! Ash removal is the most annoying part of grilling, but now, I just let them fall into the pan and dump the pan when it's full. Awesome!

And the gift came with something else: a charcoal chimney, so that I can finally graduate from lighter fluids or fluid-treated briquettes. Now I can use good quality lump charcoal, ignited with only two sheets of newspaper! Huzzah! 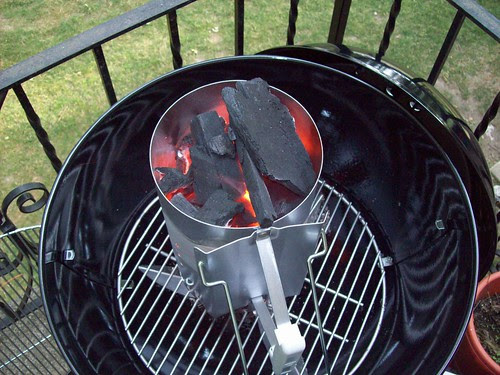 And of course, our first meal on the new grill had to be steaks. Nice, thick, New York strip steaks. Yum, steak. 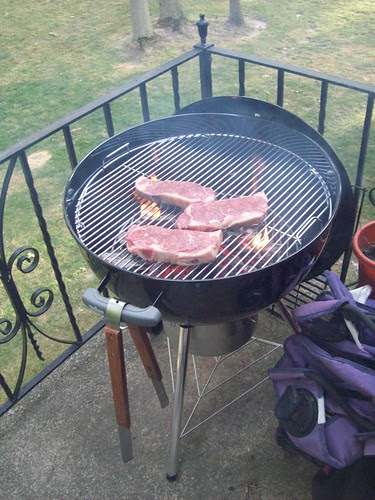 Here is a blue cheese burger (blue cheese mixed right into the patty), topped with green leaf lettuce, a slice of tomato, and instead of ketchup or mustard, a lovely Greek yogurt dressing. I served it with a halved white peach (which is my favorite of all summer fruits). 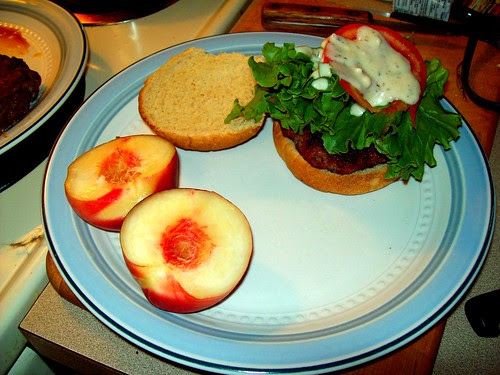 Looks good...tip of the day spritz veggie oil on the newspapers for the chimney. Lights and burns better, also try salmon with your weber grill grate right on top of a 1/2 chimney of hot charcoal. Fast heat and great sear. Please keep showing this stuff,looks great.

You are going to lovelovelove that grill. I'm actually a bit astonished at how excited I am for you.

For indirect heat there are two ways to go about it: Weber sells rails that clip onto the lower grate to separate your charcoal, or you can plunk a disposable aluminum roasting pan in the middle of the lower grate. The pan has the obvious advantage of catching drippings (making clean up easier. Drippings don't burn up in indirect heat like they do directly)

Adventures in Heat (Main St. Clarence) will always have a supply of lump/smokewoods as well as an amazing supply of rubs/sauces/marinades. I make my own rub, and I use it on almost everything I cook indirectly.

http://www.eaglequest.com/~bbq/faq2/toc.html has so much useful information.

Salmon tip: Yes, the above method for cooking salmon is great. I like to get them with the skin still on. They go skin side up, and leave them until they stop sticking to the grate (somewhere between 5 and 10 minutes) and then flip. Cook for another 3-5 minutes and then slip the spatula between the filet and the skin. The skin will stay on the grate and burn off and you get a nice piece of fish.