"If you don't have a drummer, then why do you have drums, you fistful of assholes!" 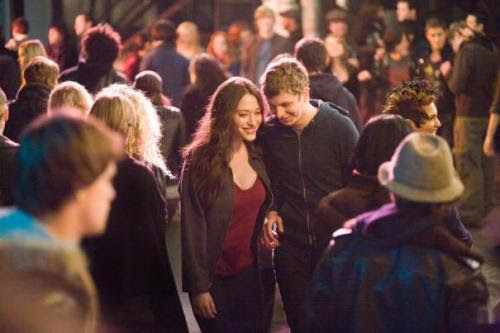 There are movies that I continually mean to see, and never quite get around to it. Sometimes I'll even check the DVD out of the library repeatedly, and still manage to let life get in my way and not watch it. One such film is Nick and Norah's Infinite Playlist, which I heard some good things about back when it came out a few years ago. I intended to see it, and yes, I checked the DVD out several times. Never watched it...until now. And wouldn't you know it? I really wish I'd watched it years ago. Or last year. Or six months ago. Whenever.

Nick and Norah's Infinite Playlist is cut from the same emotional cloth as Say Anything, which is a favorite movie of mine whose praises I never tire of singing. But where Say Anything unfolds over the course of a summer, Infinite Playlist unfolds over the course of about twelve hours. We open with Nick, leaving a message on his girlfriend's phone; Nick is your awkward, skinny, music nerd (played by Michael Cera), and it quickly becomes clear from his rambling message that his relationship with Tris is pretty much dead, although he doesn't seem able to let go. He keeps making mix-CDs for her, promising that this one, the one that pops out of his computer as he's talking to her, is the last one – "More or less".

Just after he finishes the disc, Nick's bandmate friends show up to report that they have a gig lined up for the band (which doesn't have a drummer – never fear, though, as one of them has procured a 1990s-style electric drumset), with the added enticement that a band called Where's Fluffy is going to play a gig that night. Where's Fluffy is apparently a legendary 'underground' type of band, whose gigs are never announced in advance except by clues left in places like bathroom walls.

Meanwhile, at school, Tris laughs to receive another CD mix by Nick, which she mocks to her friends before chucking it in the trash. The CD is rescued, however; Norah (Kat Dennings), who only knows Nick by listening to the mixes he's made for Tris and which Tris has thrown out, plucks the disc from the garbage. She and her friend Caroline then receive the fateful text message that Where's Fluffy is going to play that night, so it's off to the clubs of New York City for them.

Not much of what happens over the next twenty minutes or so of the movie is a surprise. Of course Nick and Norah will be at the same club; of course, they'll have a 'meet cute'. In this case, Norah wants to prove to Tris that she has a boyfriend, so she asks Nick to pretend to be the guy, which of course, backfires once Norah discovers that Nick is Tris's Nick. This is all done nicely by the actors and by the filmmakers, but it's not really all that interesting. It's at this point that the movie starts to go into interesting directions, by having Caroline get absolutely hammered, and then having Nick's friends agree to take her home so that Nick can give Norah a ride. (One of them gives Norah a different bra to wear, helpfully telling her, "Nicky is definitely worth the underwire. He just needs a little push, that's all." (Nick's bandmates are all gay, which is why they have a selection of bras in the backseat of their van. I think.)

Nick and Norah's first conversation, in Nick's Yugo, is cleverly crafted – it alternates between the characters being tentatively interested in one another and stepping back, as they're both afraid to definitively move beyond their exes. It seems doomed, but the film gives funny circumstances to keep the two of them together longer than they wish: a drunken couple assumes that Nick's yellow Yugo is a cab and climb in and insist on being taken someplace (Nick charges them $8.50); and then Caroline, still very drunk, wakes up in the strange van belonging to three guys who bear her no ill will whatsoever, but she doesn't know that, so she 'escapes', leading to the rest of the film being a search for her...and for the elusive band Where's Fluffy.

I'm already a fan of Kat Dennings, but in this movie, she displays a level of acting skill that her current big role – the sitcom Two Broke Girls -- only allows her to hint at. Norah is tough, street-smart, intelligent, naïve, and vulnerable, all at the same time. She's the daughter of a very rich man (which allows her to just walk right past the bouncer line into any club she wants), but the movie doesn't dwell on this at all, which is frankly an awfully welcome development. In fact, the world of 'adults' isn't much in evidence in this movie at all – it's nothing but young people from pillar to post, and while their focus in life might not be what grownups want, the film doesn't rigidly insist on depicting the youth as stupid, clueless nitwits who should just get a job.

Not much happens in this movie that is a real, genuine surprise, but some interesting directions are taken along the way, and I especially liked the double Maguffin of lost Caroline and this band that only plays its gigs in secret. Cera and Dennings have terrific chemistry, and Dennings is...well, there's a reason why I think she's just fantastic. This is a short and wonderful little movie. I loved it.

(Oh, just a quick warning: there is one scene in this movie that is among the grossest things I've seen in a movie. We're talking "Mr Creasote from Monty Python's The Meaning of Life" gross. If you're squeamish, well...trust your instincts. You'll know when to hit the FF button on your player.)
scrawled here by Kelly Sedinger at 9:14 PM