It came from the freezer case, vol. 1

You know what the world needs now? I mean, besides love, sweet love. The world needs someone to go on a self-guided tour through the wonderful world of frozen pizza and report on his or her findings. Of course, come to think of it, this is 2012, so I'm thinking that somebody out there in Blogistan is already doing this. Well, dammit, I'm gonna do it too.

Frozen pizza makes me happy. Always has. Now, I won't maintain that frozen pizza is ever as high-quality a product as the best freshly-made pizza, but I absolutely will maintain that there are frozen pizzas out there that are frankly preferable to quite a few places that do the fresh thing. I mean, we have to be realistic here, don't we? Not all pizzerias are wonderful. Many are. Many more are not, and many only manage to keep churning out their disappointing pizza by being cheap and/or conveniently located near a population of people predisposed to value cheap and convenient pizza (such as, say, college students).

I am no 'expert' on pizza, but I do love it and I think I have a fairly decent handle on whether something tastes good or whether it's (as some frozen pizzas really are) crap-on-toast. And since I tend to have frozen pizza for dinner a couple times a month at least (hey, it's an indulgence), why not blog about it?

I grew up eating frozen pizza. Not all the time, but my parents would keep a few in the freezer on a regular basis, so that I might have something quick and easy to feed myself in the event that Mom didn't much feel like having any kind of real answer to the question "Whatsferdinner?" (Especially when I asked this question as soon as she walked in the door after work without so much as a "Hi Mom!" first, and I couldn't get away with running it all together so it came out as "Himomwhatsferdinner?" either.)

During the 1980s, there were, as far as I recall, only two or three brands of frozen pizza available. My preferred brand back then was Totino's, which came in a red box and which was called a 'party pizza'. The pepperoni was not in discs, but tiny cubes all over the thing. I haven't seen one of those in years. I think that Tony's was the other one; Tony's is still going strong, actually. And then there was a generic, store brand. These were pretty disappointing, generally. And that was about it. (Actually, not quite: late in the 80s a new brand showed up, called "Mr. K's". This was some kind of higher-quality item which came with its own metal baking dish in the box. I recall these being pretty good, but from what I can tell, the brand has not existed in years.)

Of course, frozen pizza has exploded over the last couple of decades. There's DiGiorno, obviously, and a whole bunch of other brands. Paul Newman's is now on the scene, and the store brands tend to be a lot higher quality these days than when I was a kid. The frozen pizza section at any grocery store is now significantly larger than it used to be, which is pretty cool. It used to be a couple shelves in one door. Now it's four or five doors...or more.

So, time to get to tasting. First, on method: I will prepare all pizzas I write about in these posts according to the directions on the box. It's tempting to figure that what works for one frozen pizza likely works for all of 'em, but that's just not the case. I discovered this the hard way a number of times; I would get used to baking one brand at 400 for fifteen minutes and then not realize that the next brand called for ten minutes at 425. Some pizzas instruct you to preheat the oven; others specifically say not to. Ignoring these directions results in disappointing pizza. So, I'll be following directions to the letter.

Second, on brands I'll try: I'm up for nearly anything, but because of obvious conflicts of interest, I won't be writing about any of the frozen pizzas currently produced (or produced in the future) under the label of The Store. (I will offer up a blanket statement that I do like our brand frozen pizza.)

Third, a couple of general statements: Look, we're talking frozen pizza here. I'm not trying to compare each pizza to something made by a skilled pizzeria cook or deepdish pizza baker. I hope we're clear that I'm not claiming any high standards of food quality here. Frozen pizza tends to be very different in terms of texture from what you get from a pizzeria, no matter where; cheese in a frozen state behaves differently than freshly-sliced or grated cheese, for one thing, so frozen pizzas will rarely give you that 'cheese pull' that's familiar to lovers of fresh pizza. Also, frozen pizzas are frozen food, and frozen food tends to be higher in sodium. Some of these pies can end up tasting very salty indeed. I'll make note of it when it happens, but in general, saltiness is to be expected from frozen pizza.

I think that's about it for preliminaries. Time to talk about the first pizza! 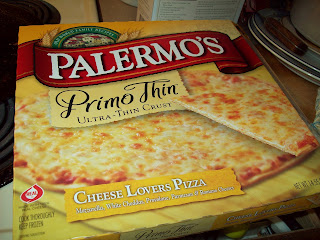 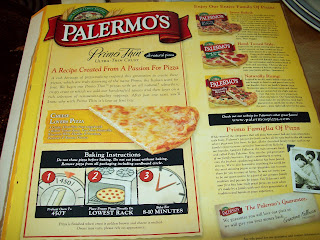 Although I've come to like fewer and fewer toppings on my pizza over the years – no more than three toppings, usually – I rarely go the whole way and just have a pizza with nothing but sauce and cheese. But this one seemed like a good place to start.

'Cheese Lover's', huh? According to the box, this pizza sports a blend of cheeses as follows: "Mozzarella, White Cheddar, Provolone, Parmesan, Romano cheeses." OK. That sounds promising, actually. I can't differentiate all the various cheese flavors in any cheese blend on a pizza, but a blend is still desirable because a cheese's characteristics tend to change a lot when melted, so a blend of cheeses gives a balance to flavor that is hard to achieve with a single cheese. Other than the cheese blend, this pizza is very basic. Here's what it looks like out of the box: 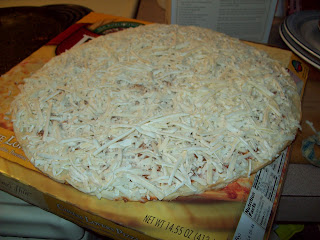 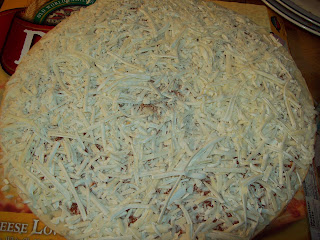 Yup. Basic indeed: just a thin circle of dough with sauce and cheese on it. And yes, this thing is thin. Palermo has a whole line of these ultra-thin crust pizzas. Super-thin crust doesn't tend to be my favorite, but if done well, I like it quite a bit, if not really loving it. Thin crust can turn out too brittle and crispy, and I don't like a great deal of crisp to my pizza. So what would happen? It's been my experience that thin crust frozen pizzas tend to get overdone at the edges.

Anyway, into the oven: 450 degrees for 8 to 10 minutes. I checked at 8 minutes and decided that it wasn't quite done, so I left it in the full 10. (Frozen pizza manufacturers always give a time range in their directions, to accommodate people's differently-performing ovens.) When I took it out, it looked like this: 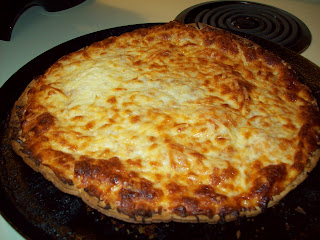 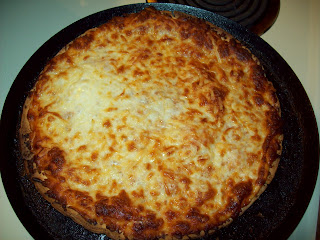 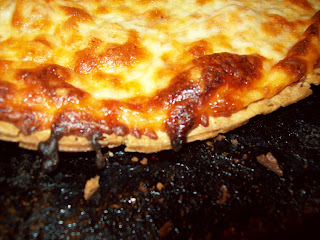 Yeah, a little but too crispy around the edge – but not horribly so. And the cheese all melted into a pretty attractive top, with brown spots and little visual evidence of the cheese's former dry and frozen state. This one came out of the oven looking really tasty, though. And here's the bottom of the crust: 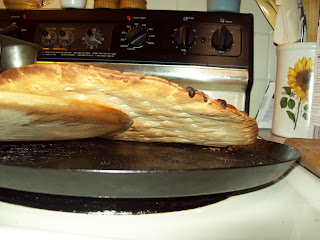 That impresses me, to be honest. At that high a temperature, that low in the oven, I feared a burned crust. Instead, no burning – just too done around the edges. But what about the taste?

Well, this pizza was actually pretty good. It had the frozen-pizza saltiness, but it wasn't overwhelming and I didn't feel as though I needed to down several swigs of water every other bite. The crust here really does turn out to be really thin...but not as thin as, say, the Thin-and-Crispy at Pizza Hut. (Horrible dough to work with, by the way. Just horrible.) It's just thin enough to give you a stiff slice of pizza and a definite crunch when you bite into it, but just thick enough to give that crunching bite some body. Again, aside from the outer rim (which was overdone), the crust was fine.

The tomato sauce? Very nice, actually – just enough so you know it's there by taste, but not overwhelming, either. The sauce is more tangy than sweet, and it works very well with the cheese blend. And as for that: the cheese is probably the best thing about this pizza. Frozen pizzas generally won't give you that elastic quality to the cheese, like fresh pizza will – generally when you bite into a slice of frozen pizza, you don't get long tendrils of molten cheese dangling between you and threatening to detach and flop onto your own chin. Frozen pizza cheese tends to stay where it is.

And yes, the cheese here does just that: stays where it is. Within reason. I had a couple of 'stretching cheese' moments whilst eating this one, and the cheese really did start to trail away from the slice. It snapped back, but still, that was a nice thing to see in a frozen pizza. And while I did notice the saltiness of the pizza, the main flavor here was of cheese, not salt. I appreciate that.

So, I give this one a fairly high grade. Nice job by the Palermo folks on this one!

The stores around here still have Totino's and it's still exactly like it was in the 70's.

When my kids were still kids Monday night was frozen pizza night - something to look forward to on the worst day of the week - and our brand was Tombstone. At the time it was the best. Now my favorite is Red Baron but I still buy Tombstone once in a while. I usually buy pepperoni because it's the one kind everyone can agree on. My guys are not as adventurous as I am.

Man, I cannot be reading this when I'm hungry...

FWIW, Totino's is still available out here in Utah. My GF loves 'em. However, this Palermo's doesn't look at all familiar, which is a shame, because your pics look pretty appetizing...