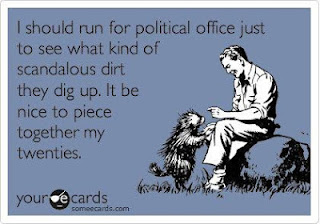 In my case, they wouldn't dig up too much scandalous stuff. I think. I didn't spend that much of that decade in a drunken stupor. But then again, I doubt the country is ready for a President who would wear overalls to deliver the State of the Union, challenge Republicans to pie fights, and spend ridiculous amounts of time arguing online about whether John Williams is better than Jerry Goldsmith.

::  I'm pretty sure I've highlighted her work here before, but there's a photographer I follow on Flickr (going by the name Ar'alani) whose work I invariably find absolutely gorgeous. Here's an example:

::  Julian Barnes on a life of bibliomania:

I am more optimistic, both about reading and about books. There will always be non-readers, bad readers, lazy readers – there always were. Reading is a majority skill but a minority art. Yet nothing can replace the exact, complicated, subtle communion between absent author and entranced, present reader. Nor do I think the e-reader will ever completely supplant the physical book – even if it does so numerically. Every book feels and looks different in your hands; every Kindle download feels and looks exactly the same (though perhaps the e-reader will one day contain a "smell" function, which you will click to make your electronic Dickens novel suddenly reek of damp paper, fox marks and nicotine).

Books will have to earn their keep – and so will bookshops. Books will have to become more desirable: not luxury goods, but well-designed, attractive, making us want to pick them up, buy them, give them as presents, keep them, think about rereading them, and remember in later years that this was the edition in which we first encountered what lay inside. I have no luddite prejudice against new technology; it's just that books look as if they contain knowledge, while e-readers look as if they contain information. My father's school prizes are nowadays on my shelves, 90 years after he first won them. I'd rather read Goldsmith's poems in this form than online.

scrawled here by Kelly Sedinger at 10:55 AM

Of course you know I don't always agree with politically on everything but the overalls, the long hair, the pie fights... I wouldn't have a problem with any of that.

I'd vote for a president in overalls any day. And I'm up for the pie fights, too.

That's a great clip on the value of paper books. I adore books and have no interest in the electronic readers, and if that makes me a luddite I'll proudly wear the lapel pin.

Good to see you're still blogging!

But then again, I doubt the country is ready for a President who would wear overalls to deliver the State of the Union, challenge Republicans to pie fights, and spend ridiculous amounts of time arguing online about whether John Williams is better than Jerry Goldsmith.

Until you said it, I didn't realize just how ready I was for it.

Whereas, in MY twenties...
But I'd vote for you BECAUSE of the overalls!