Stitching the damned words together: a writing update 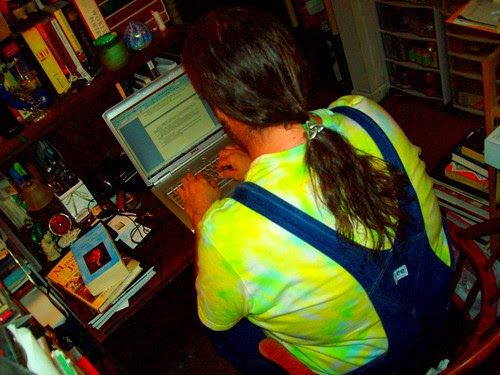 I'm thinking that posting here may be slightly more sparse than usual during August, since I'm really trying to make some writerly goals here. Specifically, I want to get all the way through my red-pen markups of the Princesses in SPACE!!! (not the actual title) manuscript by Labor Day. Then, I want to have my personal edits applied by October 1, so I can get the book into the hands of beta readers. Depending on how long it takes beta readers to do their thing, and how much editing I have to do after I get that feedback, I'd love to be able to hit 2013 with sending this book out into the Void, where I hope a publisher will snatch it up. (Or maybe I'll query agents first...not sure what the best route is, actually, which is more homework I need to do.)

The red-pen markups proceed apace, though, so I'm optimistic. I know of a few dates when I'll not be able to get through my daily goal, so I'm going to have to make up for those elsewhen. I'm also hoping that the markups on the latter half of the book will go easier than the first half is thus far, as by that time I had a lot stronger idea of where the book was going. I'm finding a lot of meandering passages in the early going, that's the literary equivalent of throwing stuff on the wall to make sure it sticks.

As for The Adventures of Lighthouse Boy (not the actual title), work is going along nicely there, too, although I did have to do a backtrack last week that wiped out ten thousand words (although I was able to reuse some of it). I'm aiming here for something of a rollicking adventure tale in the Alexandre Dumas tradition, with secret identities and alliances, royalty in hiding, hidden treasures, double crosses, and quite a lot of derring-do. Making a story rollick is not the easiest of tasks, and every so often I have to remind myself to put something in that rollicks.

I also had two characters show up out of the blue and quickly become essential to the story. I'm not kidding. I had my main character walking alone on a road, on his way to someplace, and I wanted to delay his arrival a bit, so I figured he'd meet someone. And along came these two folks who are now very important indeed. I like it when the story writes itself. I have a feeling that this book will need to be longer than Princesses (which I vowed to bring in under 180,000 words). I'm not sure yet, but I'm letting the story dictate the terms here. We're talking lots of planned twists-and-turns here, and I'm sure there will be a bunch that I don't even see coming.

Anyway, that's where things stand with the writing. Onward ho!

good luck.
(and a reminder of why I don't write long form; too impatient...)