Man of steel, suit of rubber

Here's a problem: the teaser poster for the new Superman movie, unveiled at Comic Con: 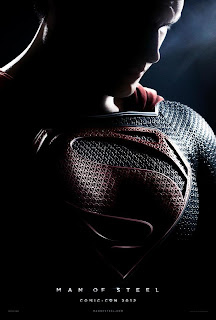 I just don't like this poster at all. It does nothing to make me want to see the movie. I hate the washed-out colors (I really wish this era of dull color schemes in movies would come to an end), and I really dislike the weird rubber-material appearance of the costume itself. I know, I know, I'm one of those people -- but Ye Gods, the first Superman movie is one of the iconic superhero movies ever made, and in that one, Superman wore a suit made of...cloth. Now, no, this doesn't mean that the movie itself will stink. If it's good and the script is good and it's shot and acted well and the score doesn't stink (which is, frankly, six to five and pick 'em, what with Hans Zimmer composing it), something little like a costume isn't going to stop me from seeing it and enjoying it. But I'm not complaining about the movie, just a poster.

And as a poster, this does spectacularly little for me. All this does is remind me that there's a Superman movie coming out at some point. Here, on the other hand, is a fan-made tribute image for the original Superman movie: 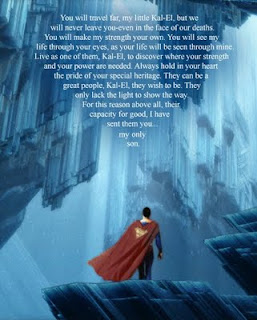 This (via) makes me want to drop what I'm doing and watch that movie again right now.

As others have pointed out this image is somewhat derivative of a certain Alex Ross cover: