A to Z: Spaceman Spiff

Once upon a time, the occasional adventures of one of the greatest of all Interplantery Adventurers Extraordinaire appeared in daily newspapers across the world. You couldn't be certain of when he would appear, but sooner or later, there he'd be, and we'd thrill to his exploits, as envisioned by a young schoolboy with, shall we say, a fascinating combination of powerful imagination and a very short attention span. Yes, it's our hero, Spaceman Spiff! 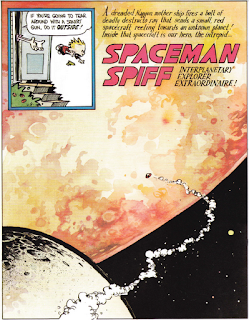 Spaceman Spiff is, as most cultured persons know, one of the imaginary alter-egos of young Calvin of Calvin and Hobbes. Spiff tended to turn up in moments when Calvin's attention span was wandering wildly from something he probably should have been attending to more (such as school lessons), but not always. 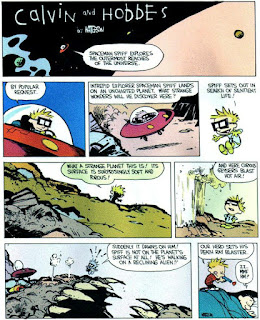 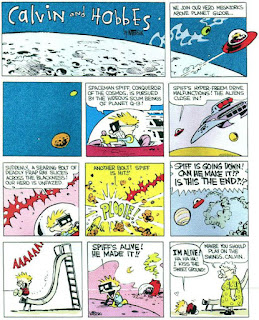 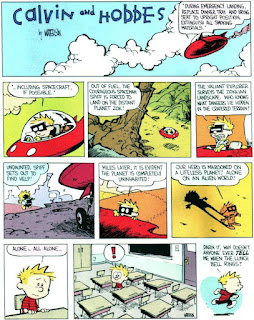 Bill Watterson (creator of C&H) always seemed to me to have a really good grip on the fact that for children, the boundary between reality and imagination is nowhere near as strong as adults tend to prefer. Kids seem to have this ability to switch back and forth between their imaginations and their realities almost seamlessly, which can be confounding for adults who have lost this ability (or worse, the ability and the memory of how wonderful that ability made the world). This very ability seems to me a key component in the lives of creative individuals, and amongst the oft-cited characteristics of young Calvin, it's his astonishing creativity that seems to go unnoticed much of the time.

I always thought that Watterson in C&H was able to stay right at the line of pointing out that imagination is a good thing, while also pointing out that yes, our hero Calvin can take things too far. But it's fascinating to me that, in the last of the "Rosalyn the Evil Babysitter" storylines, Rosalyn was finally able to get some control over Calvin not by battling against him, but by giving in and making Calvin's signature sport, "Calvinball", work for her. She had to endorse imagination in order to corral this kid who was running out of control.

The Spiff stories were also notable in that tales like this -- and when Calvin imagined himself to be other things, such as a dinosaur, or superhero Stupendous Man, or hard-boiled private investigator Tracer Bullet -- allowed Watterson to really go all-out with his art in a way that you really can't do when your comic strip is set in the real world. Watterson was thus able to cook up nasty-looking aliens, landscapes of other worlds, and various bits of explodey-spaceshippy-goodness. In creating a kid with an extremely potent imagination, Watterson created for himself the ideal playground for a cartoonist with an extremely potent imagination. (He would also cite that he would use such opportunities to pay tribute to the comics masters of the past, like George Herriman of Krazy Kat.)

So, let's all raise a glass to the ongoing and incomplete and always-interrupted adventures of Spaceman Spiff, and to the imagination, both real and fictional, that created him!

Here's my favorite of all the Spiff strips: 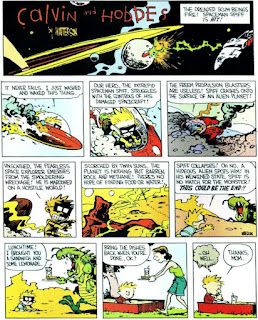 scrawled here by Kelly Sedinger at 9:23 AM

My husband and absolutely love Calvin. Almost named our first born son after him as a matter of fact. Went with Kevin instead. :)
Love your header photo btw.


Stopping in via the A-Z blogging challenge.

These were always fun!