A to Z: Lancelot

One thing I noticed in all my years of reading Arthurian fiction was that Lancelot is an awfully hard character to pull off. 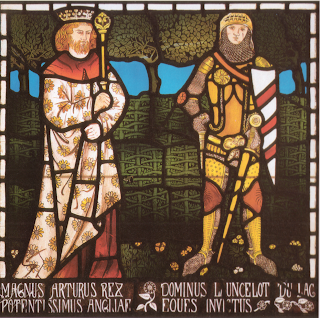 Lancelot, for those not 'in the know', is the magnificent knight from France who comes to Camelot to serve King Arthur and sit the Round Table. Lancelot is the greatest knight anywhere (well, until Galahad shows up); no one can best him in any test of skill, and what's more, he's morally pious to the point that being around him is a real downer. At least, he's those things until he meets the Queen, Guinevere, and falls in love with her. This would be bad enough, but she falls in love with him, too. Lancelot and Guinevere carry on an affair that eventually becomes the moral crisis that causes the Knights of the Round Table to splinter, and in the end brings about the end of King Arthur's reign.

Now, depending on which version of the tale you read or watch, it's not all the fault of Lancelot and Guinevere. Many tellings of the story also include Arthur's magical seduction by his witch sister, Morgause, who bears a son, a force for malevolence named Mordred. In these tellings, it's Mordred who finds out about Lancelot and Guinevere and forces their affair into the open, in turn forcing King Arthur to choose between enforcing his morality or allowing his deepest friend and wife to go free.

The problem with Lancelot, then, is two-fold. First, you have to establish that he's virtually perfect, which makes it nearly impossible to sympathize with him. Then you have to make him sleep with his best friend's wife, which also makes it nearly impossible to sympathize with him. This is why, when I've read Arthurian fiction, it's the Lancelot character who usually suffers the most, and in reality, this is why I can't honestly even recall a book where Lancelot comes off very well at all. T.H. White's The Once and Future King probably does it best of anybody, but even for him, Lancelot comes off feeling a bit unreal.

Lancelot's origins are hazy, but that's to be expected, as the origins of the entire Arthurian corpus are pretty hazy; the Arthurian legends – the "Matter of Britain" – were not so much created as they accrued over time, gathering bits and pieces from other, older legends and myths and folk tales. Back when I was studying Arthuriana a lot, I started to realize that I was finding that older material more and more compelling – tales such as the Welsh Mabinogion and other parallel stories.

Why has the definitive Lancelot not yet turned up? I think it's probably part of the same reason that a definitive telling of the entire Arthur story hasn't turned up. The story is not a story, but rather a collection of interrelated stories, a grab-bag of tales, told in many different styles over the centuries. As for poor Lancelot himself, he's a tough nut to crack because he's a jerk in two different ways and if there's one thing we like, it's to see a jerk get his comeuppance. But we also don't like to see jerks take good people down at the same time, which is why the tale of King Arthur is such a tragedy.

As I note, Lancelot is a deeply troublesome character to pull off. Most authors, I have found, choose to make Lancelot less than perfect, and merely a likable guy and a very good knight. They also try to soften Guinevere's appearance of fault by making her more sympathetic -- possibly by making her marriage to Arthur an arranged marriage, so that while she honors him and may even love him after a fashion, he never has her heart. Making everyone sympathetic in a tragic story that involves moral failure is not an easy thing, and to my experience, no one has quite pulled it off.

Ultimately Lancelot seems to be a reminder that our greatest dreams for ourselves may well be unattainable, and that our hubris often contains the very seeds of its own downfall. King Arthur forms the Round Table out of a desire to have a peaceful realm where justice is served by all his knights, but along comes Lancelot, ostensibly the man most ideally suited to this lofty goal – and he's the one who sets in motion the events that will eventually destroy the Round Table and cost Arthur himself his life (or, at the very least, see him carried off to Avalon).

I was really surprised to see that you left out Kay's interpretation of the Arthurian mythos in The Fionavar Tapestry. It is one of my favourite, with the story becoming an equilateral triangle, the love between all three of the characters being deep and strong - and Lancelot neither being a pratt, nor too perfect to like. Too complicated for one post?

But, yeah. What about that?