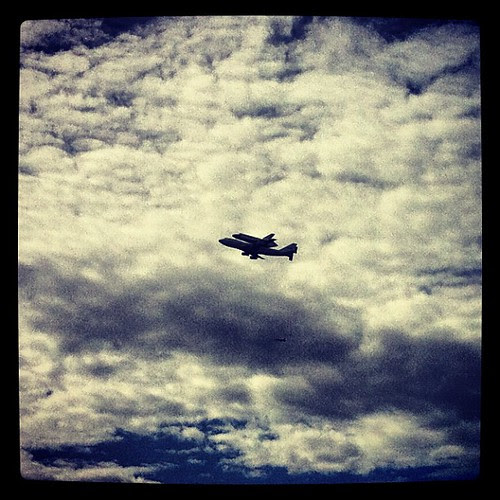 They were chunky, clunky ships. They looked cool at first, since they looked like something that should fly, instead of the capsules and LEMs that had looked like distended tin cans or crumpled bits of tin foil. They looked, at first, like what you might think of when you thought "spaceship".

But over time, they looked clunkier and clunkier. Their fragility became scarier and scarier, and two of them carried their crews to their deaths. An inevitability, that -- we do not collectively flaunt danger without danger eventually exacting a price -- but still, two of them ended their final flights in flame. They became something of a joke over time, a literal holdover of 1970s technology into the 1980s, then the 1990s, then the 2000s. Newer ships were promised; pretty pictures of potential newer ships were trotted out every so often. Presidents would show up, pay lip service to our destiny up there, and then go home. And yet, these clunky spaceships kept flying, until someone finally decided that they would fly no more.

And yet, there are no new ships. There will be again, someday...but not for a while. One day, someone will decide to take a slightly smaller step, but a much more giant leap. But for now, we look up and think, "We've gone far enough." Really...what kind of human thought is that?

These ships are done, and none take their place. This saddens me greatly. I was no great lover of these ships, which were utilitarian and got the job done for longer than they should have. But they did a job, and now their voyages are done. I just wish it didn't feel like the voyages were ending.

Godspeed, Columbia and Challenger; Godspeed, Enterprise (the one that never flew), Discovery, Endeavor, and Atlantis. Here is a selection of Bill Conti's music from The Right Stuff.