The obvious choice here is to talk about Q, but I couldn't decide which one. This Q? 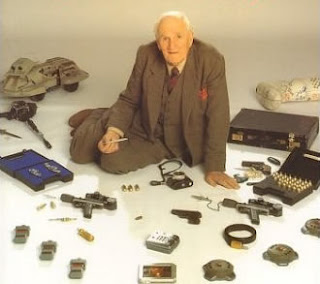 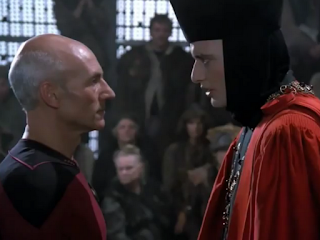 Luckily, this is my personal blog, where the only rules that apply are the ones that I choose for myself, and which I can summarily set aside any time I want, so...let's talk about both Q's!

Our first Q is less well-known as Major Geoffrey Boothroyd. (The only time we ever hear his name in the James Bond movies is in The Spy Who Loved Me, when he holds a door open for Agent Anya Amasova, and she thanks him by name.) Q's first appearance was in From Russia With Love, when M informs Bond during his briefing that "Q branch has been working on something special for you." In walks our man, looking pretty young and spry back then, played by actor Desmond Llewellyn. He's got with him a briefcase that has trick catches that, if not opened properly, causes an explosive to go off; contains a rifle that's nicely broken down into a bunch of small pieces (this was 1962, well before X-ray machines at airports!); and fifty gold sovereigns. There had been a character in Dr. No simply referred to as "the armorer", who relieved Bond of his Baretta pistol (derisively calling it a fine gun "for a lady's handbag") and giving him his trademark Walther PPK, but the guy we would know as Q didn't come until the second movie.

But it was in the third Bond film, Goldfinger, that Q would become iconic. That's when he unveils his tricked-out Austin Martin DB-V, with machine guns in the headlights, spinning license plates, homing device trackers, and the ejector seat. It's too bad that the car doesn't end up amounting to much...but Q's attitude toward James Bond becomes clear when Bond says "You're joking!" in reference to the ejector seat, and Q replies, "I never joke about my work, 007."

Q was a fixture for most of the remaining Bond films. He wouldn't appear in Live and Let Die, but he'd be present for all the remaining films until Die Another Day; Q was revealed to be retiring in The World is Not Enough; he even introduced his successor, who was played by John Cleese, in an inspired bit of casting. There was a giant pall cast over the whole thing, though, when Desmond Llewellyn died in a car crash not long after TWINE came out.

The Daniel Craig films have not availed themselves of a Q character yet, which I hope is forthcoming, even if I also hope that the gadgets don't get too outlandish (the invisible car in Die Another Day was too hard to believe). Maybe in Skyfall; I don't know yet.

My favorite Q gadgets? I loved the exploding key ring in The Living Daylights, the wrist-activated blowgun of Moonraker, and the fountain pen filled with acid in Octopussy. And my favorite Q moment came in Licence to Kill. In that film, Q actually goes out into the field to assist 007, who has gone rogue. Now, all through Bond's career, Q has constantly complained that Bond never returns his gadgets in their original working condition. Late in the movie, though, Q is posing as a peasant sweeping a sidewalk when the bad guy drives by. Q alerts Bond via the little radio he has attached to the broomstick...and then, with his job done, he casually tosses the broom aside.

But...what about the other Q?

This Q showed up immediately on Star Trek: The Next Generation, right in the very first scene of the pilot, and he was originally depicted as a representative of a nearly omnipotent species that is deeply ambivalent toward humanity. Played with zeal every time he showed up with John de Lancie, Q put all of humanity on trial through the persons of Picard and the rest of the bridge crew. I think the character of Q went through evolution, though, as all characters do. Originally, Q was seen more as a trickster character, but then he became more of a gadfly through whom the Enterprise crew learned their deeper lessons about the universe and about life. Most of Q's episodes were highly memorable: it was Q who made the Borg aware of the Federation; it was Q who greeted Picard in the afterlife and somehow arranged for him to experience an astonishing life lesson.

I never liked Q as much when he started turning up on DS9 or Voyager, when the producers started to explore the entire 'Q Continuum' and the politics thereof, which had the unfortunate effect of turning Q into, well, another in a long series of alien races with their own concerns and whatnot. When he was by himself (for the most part), Q something unique unto himself.

I didn't like Q (from Trek) first either and then I did. After I figured out he was a Loki figure and related him back to The Squire of Gothos, Q got ok for me :-) Here from the A to Z Challenge