A to Z: Old People of Wisdom 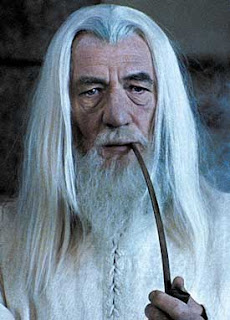 What do all these folks have in common? They are Old People of Wisdom.

"If you're referring to the incident with the dragon, I was barely involved. All I did was give your Uncle a little nudge out the door." --Gandalf the Grey, The Lord of the Rings: The Fellowship of the Ring (film)

Of course, those familiar with 'the incident with the dragon' know that Gandalf did a lot more than that. Yes, he showed up on Bilbo's doorstep and introduced him to a bunch of dwarves who wanted to hire him to be their burglar, but how did it come to that? How did Gandalf settle on Bilbo, and not, say, some Bolger or Bracegirdle or Proudfoot? It's often the role of the Old Person of Wisdom to see something in the hero that they don't see in themselves. Gandalf sees in Bilbo a stalwart burglar. Obi Wan Kenobi sees in Luke Skywalker a future Jedi knight. (We'll learn, of course, that he has a lot of reasons for seeing that.) Loren Silvercloak sees in five young University of Toronto students qualities that will prove essential in the final war with the darkness of Rakoth Maugrim.

One of the interesting things about the Harry Potter books is the way that multiple characters fulfill the function of the Old Person of Wisdom. Albus Dumbledore is the key of them all, but he doesn't do it all. The Call to Adventure comes from Hagrid. Supernatural aid comes not just from Dumbledore but from McGonagall, Sirius Black, Remus Lupin...a whole host of people. Of course, JK Rowling didn't blaze this trail on her own; in the James Bond movies, what are M and Q but Old People of Wisdom? 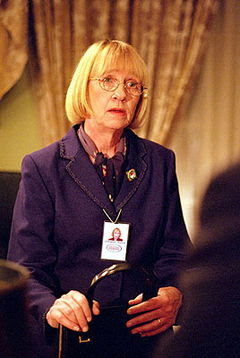 Why does this trope have so much power? It seems pretty obvious to me. Age implies experience and wisdom. We look to the mothers and fathers of our communities for wisdom. And we know that eventually they move on, into death, and that eventually the story will be ours and ours alone...until we have to serve as Old People of Wisdom ourselves.

I'm reminded of the wonderful closing speech that Sir Anthony Hopkins delivers in the movie Amistad:

The other night I was talking with my friend, Cinque. [The African man who was kidnapped into slavery and who is suing for his freedom in the film.] He was over at my place, and we were out in the greenhouse together. And he was explaining to me how when a member of the Mende -- that's his people -- how when a member of the Mende encounters a situation where there appears no hope at all, he invokes his ancestors. It's a tradition. See, the Mende believe that if one can summon the spirits of one's ancestors, then they have never left, and the wisdom and strength they fathered and inspired will come to his aid.

We desperately need your strength and wisdom to triumph over our fears, our prejudices, our-selves. Give us the courage to do what is right. And if it means civil war, then let it come. And when it does, may it be, finally, the last battle of the American Revolution.


What's wonderful about this particular cinematic moment is that in the film, Hopkins's John Quincy Adams is himself an Old Person of Wisdom...and yet here he is, citing the eternal need in our species for Old People of Wisdom. (You can watch the speech here.)

It's almost impossible, I think, to avoid the trope of the Old Person of Wisdom. It's not just ingrained in our storytelling. It's ingrained in us.

Although literature and film (and real life) is unquestionably filled with OPoWs, I'm equally intrigued by the "somewhat older than ourselves but not really old" people of wisdom. Figures like Han Solo to Luke... not a mentor exactly, but an older, more experienced person who does have lessons to teach himself, and whom Luke (in the first movie at least) kind of looks up to as a surrogate older brother. River Phoenix's character in Stand by Me serves a similar purpose for Wil Wheaton's Gordie... or McCoy to James T Kirk (Bones always played as a few years older than Jim, at least to me). I've not read Campbell, so maybe he discusses these characters as well...

Jason: I agree...but I didn't dwell much on them because I was constrained by my topic, as chosen for the letter 'O'!

I'm comforted by OPoW because so few people seem to understand their value in real life, at least not initially.

Side observation: Amistad is just ET with Africans as aliens.