A to Z: Incunabulum

Books abound in fantasy and science fiction. The book is a central plot device or Maguffin or important element in so many stories that to catalog them all would be an exercise in utter futility. But let's explore some anyway, in this entry. Behold the Incunablum!

Strictly speaking, an incunabulum (plural incunabula) is a book printed in Europe before 1501. According to Wikipedia, this is an arbitrary distinction, which is why I can get away with it here. But it's a cool word, and it kind of connotatively suggests not just any old book, but rather the types you see a lot in fantasy: big, heavy tomes with lots of pages between leather covers. A locking clasp is also good; witness Indiana Jones's Bible in Raiders of the Lost Ark. 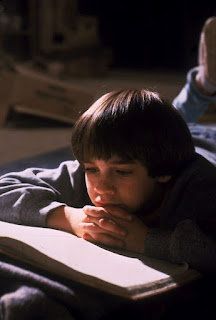 Books are so often important objects within fantasy and SF stories that I can only offer a smattering here. The Neverending Story is a great example (even if I don't like the movie all that much), in which the act of reading a story and the act of being in a story are melded into one. Books are a constant thing in the Gothic YA novels of John Bellairs; in one, the young hero's adult friend is a literature professor, while in another, the adult companion is actually a librarian.

Books are the ultimate symbol, I suppose, of education and learnedness. Showing a person surrounded by stacks and stacks of books is almost a cliché for "This person is smart!" But it can also be shorthand for "This person is really eccentric!" -- hence all the somewhat dotty wizards and witches in fantasy literature who are forever losing themselves in the pages of their tomes. And books can also establish one more facet of someone's ass-kickingness: 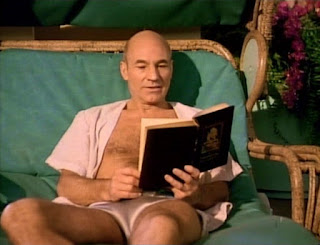 Magic books? Those can be found, too. A magical book is at the center of Lloyd Alexander's Prydain Chronicles, which begins with The Book of Three. Books are the magical gates between worlds in the computer game Myst. Books as central organizing principles of civilization? The original series Star Trek episode "A Piece of the Action" gives us a society that has organized itself around the rules of a civilization they read about in a book they recovered from a crashed starship. Unfortunately, the book was about mob men of Prohibition-era Chicago. This notion would later be repeated in the Next Generation episode "The Royale", in which some well-meaning aliens construct a 'world' for the sole human survivor of a crashed spaceship on their world; they assume that the crappy novel he's reading is an accurate depiction of human society, so they create that novel's setting for him. (This is one of my favorite episodes of the series, although it doesn't seem terribly popular.)

And books can be key moments of villainy, too. George RR Martin has well established King Joffrey's colossal sociopathic status by the time we get to A Storm of Swords, but that doesn't stop Martin from giving us a scene where Joffrey receives a very rare book as a wedding gift, and then uses another wedding gift – a sword of Valyrian steel – to chop the book in two. When someone points out that there were only four existing copies of that book in the world, Joffrey shrugs and says, "Now there are three."

I could go on and on, but I'll stop there. But remember: books rule!

scrawled here by Kelly Sedinger at 6:28 AM

Yay, someone else who likes The Royale! It has always been one of my favourite episodes ever, but usually people just groan when I mention it.

I love books and hope my creations will one day lift other people out of the mudane to realize that their thoughts are just as real as the sun and the stars.

Don't judge the Neverending Story by the movie! The movie is terrible! The book is wonderful!

Books are so different from movies because you cannot project what's going on in a character's head on screen very well.

Such a lovely topic. The fascination with books began early and I hope will stay late. E-readers worry me as I love the peacefulness of sitting with a book, the feel of the pages, and the paper with ink perfume lingering--ah, heaven.