A to Z: Florin

Stories have to take place somewhere, don't they? In the best of tales, the someplace is almost as important as what goes on there. Heck, there are times like The Lord of the Rings when the setting is, or seems, more important than the tale. The rule of thumb holds: if the setting isn't memorable, then the tale of the fantastic isn't going to be, either. Conversely, if you have a really good tale, your setting's going to be good. So, it stands to reason that one of the greatest of all tales – a tale featuring fencing, fighting, torture, revenge, giants, monsters, chases, escapes, true love, and miracles will take place in a very special realm indeed. Hence Florin, the land of The Princess Bride. 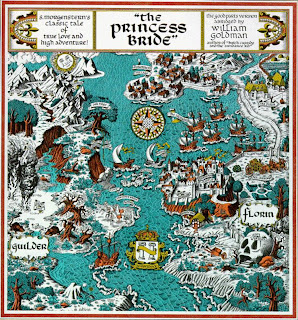 We don't learn a whole lot about Florin as a country, really. What we know is that it is a monarchy, ruled currently by a very old King and Queen, with a nasty Prince waiting in the wings. Florin is the sworn enemy of Guilder, a nation that lies across the sea. Florin is largely agrarian, and yet it has a number of notable geographic features, such as the enormous Cliffs of Insanity and a horrible place called the Fireswamp. Florin is also the location of vicious sea creatures like the Screaming Eels, and the rumored ROUS's that dwell in the Fireswamp.

The people of Florin don't appear to be terribly wealthy, and the castle itself looks fairly spartan in its appointments, so it's to be assumed that Florin doesn't have much of a standing army. This likely explains why the elite of Florin seem to prefer schemes against Guilder to open wars of conquest. The latest such scheme, hatched by Prince Humperdinck, involved his murder of his own wife and framing Guilder for it. This plan turned out to be overly complicated, to the point where Humperdinck had to claim that it was a major reason for his being 'swamped', and in any case, Humperdinck failed to take into account the power of Twoo Wuv...er, True Love.

Florin's greatest achievements as a nation may well end up being the fact that the Greatest Kiss of Them All took place there, and its placement of the phrase "As you wish" among the most powerfully romantic things one can say to one's lover.

I love "Princess Bride" - really do. I've seen the movie and read the book, in that order.

If you like Princess Bride, you might also like the real Grimm's Fairy Tales. I picked up the Barnes and Nobles Classics version from a used book store. It's great. They're so much more diverse and imaginative than the handful of the Grimm stories that we're used to.

I have the real Grimm as well. Really grim, at times.

Chris: I've done a lot of dipping into various collections of mythology and such over my years...Bullfinch, Campbell, Icelandic sagas, the Mabinogion, and more. Great stuff! I love it all, and it's grist for the mill.

Roger: I've dipped a lot into Grimm as well. And yes, they're often grim. It amuses me to read the old literature that lots of times folks will bemoan the lack of reading today, on the basis that the older stuff is more in line with the values they claim to miss...and yet, there is horror galore in Grimm's Fairy Tales, the Iliad and the Odyssey abound in graphically-described violence, and there's rape and infidelity a-plenty in the Arthurian legends. I sometimes wonder if those folks have read those books, themselves.

@ Roger: I haven't read the whole thing yet. I LOVE "The Six Servants," which is a little like the friendships between Sun Wukong, the Monkey King and the other adventurers travelling to the West.

@ Kelly: If you like those, try "Parallel Myths," by Bierlein.

Also, sorry I blocked you. :-( When you posted my comment twice I didn't know why. I just didn't want to think about it for a bit because I thought you might be laughing at me.

Your comment posted twice? I'm not to blame! In all seriousness, for some reason that happens once in a while, and not just to you. Usually I catch it, but on that particular day I had a bunch of unmoderated comments, so I just selected 'ALL' and published them en masse. So yours doubled up and I didn't realize.

Not that you're likely to deserve it, but when I mock, there's no mistaking it! :)