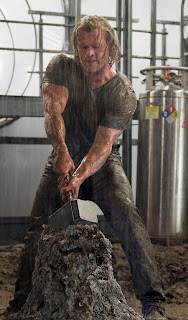 Thor was never my favorite Marvel superhero, not by a longshot. I never really got the whole thing...he was a Norse god, that much I knew, but the whole "Norse god banished to twentieth century America" never made a whole lot of sense to me. I just didn't get it. And it didn't help that, from my perspective, the Thor comics weren't in the midst of a great run or anything when I was really into comics, from 1983 or so to 1989. Thor was just kind of there.
Thus, I wasn't all that keen on a Thor movie, either...I had no major objection to one, but I wasn't terribly interested in it, either. And frankly, the only reason I bothered to see it at all was because it's part of the background for the upcoming Avengers movie. So I decided to check Thor out.
And you know what? I'm glad I did. Thor is a comic book movie that really succeeds in nailing what a lot of comic book movies fail to do: combine elements of Big Mjaestic Heroes With Great Powers Who Are Fighting Cosmic Horrors, along with elements of goofy fun.
I won't bother giving a plot summary, since Thor's plot is fairly convoluted in that comic-book way of making sense while you're watching it, but not being easy to remember once you're done. There is an ancient struggle between Thor's people, the people of Asgard, and the evil Frost Giants of Jotunheim. These places look more like other planets than mythical realms – especially Asgard, which is a fantastic cityscape and yet looks oddly unpopulated at certain points along the way. Thor is an impulsive youth who is destined to be King, as long he doesn't keep screwing up...but screw up he does, and his father Odin (played with proper pomposity by Anthony Hopkins) banishes him. To where? Why, Earth, of course!
Of course, Thor is found on Earth by a trio of scientists, because you can't have a Marvel comic book story without some scientists roaming around. This time, our lead scientist is played by Natalie Portman; she's accompanied by Stellan Skarsgard (an actor who never bugs me, but also never really impresses me much, either), and a third scientist played by Kat Dennings. (Now, I had zero idea that Dennings was even in this movie, so that was a happy surprise. And I loved her character – she doesn't have much to do, but there's a weird 'happy medium' thing going on with her: she's a scientist, but from a different discipline, so she's usually one or two steps behind, without seeming stupid about it. Playing smart is one thing; playing smart-but-not-entirely-invested is something else.)
The production design of Thor is pretty nifty. This movie really looks like it's inspired by a comic book. Everything is big and bold and bright and colorful (except for the Frost Giant kingdom, but what can you do there, they live on a giant ice cube), and the film's main Earth location is not a big city but some small town in the middle of the New Mexico desert, the kind of small towns that comic books are always sticking out in the middle of nowhere so that Big Important Cosmic Things can happen there. Our scientists have a lab set up in what looks like an abandoned 1950s breakfast restaurant. And when Thor's Hammer shows up in the middle of an impact crater, something not unlike a redneck version of the knights coming to take a whack at pulling Excalibur out of the stone transpires. (Keep an eye out for the cameo appearance by a guy playing a doofus with a pickup truck.)
Thor is a movie where the heroes can all stand around talking about kings and wars for the ages and their destinies and their duties, while also having the hero meet the heroine when she hits him with her truck...and then, the next day, hits him with her truck again. There were times, watching Thor, when I thought, "This movie shouldn't work"...and yet, oddly, it does. Director Kenneth Branagh keeps things whisking right along; he doesn't spend much time lingering over anything, and the script is full of tiny touches that really ring true – such as Dennings's inability to pronounce 'Mjolnir' correctly, or Thor's attempt to secure a second cup of coffee in a diner. The film's only weak spots, for me, were in making Asgard look a bit too antiseptic, and in the guy who played Loki – he just seemed slightly bloodless. (Although, if they ever reboot Star Trek: The Next Generation, I know where they can find their Lt. Cdr. Data.)
At this point in the whole superhero thing, I don't think a movie is ever going to come along that will supplant Superman in my heart as the definitive superhero movie. But Thor comes quite a bit closer than most have. What a fun movie!
scrawled here by Kelly Sedinger at 11:30 AM

I don't think I've ever read a single Thor comic, but I really enjoyed this movie, largely because of its tone: lighthearted and swashbuckling without being silly or camp, the complete opposite of The Dark Knight school of superhero flick, in which everything is so, so, so very serious. I did my dark and broody thing in my 20s; I don't want to go there anymore. I want some non-stupid escapism, and Iron Man, Thor and Captain America all deliver. (I'm really hoping The Avengers will come together properly, too.)

I think some of the credit for this movie working also should go to Chris Hemsworth in the title role, who knew just how to play this character and exuded the kind of confidence that women love but which doesn't threaten men. Or, to put it another way, women want him, men want to hang out with him. It was perfect for this character...

Too funny. I watched this one again this weekend and it was better than I remembered it. Great cast and great compromises to make one of the best live action comic book movies. I appreciate it for all the good it will bring to the genre. Done with love.