Beating This Book Into Submission 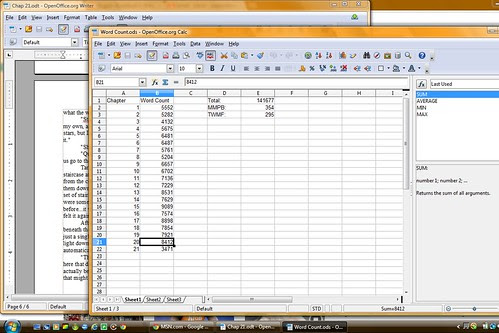 Yup, the manuscript for Princesses In SPACE!!! (not the actual title) now stands at just over 140,000 words. I'm aiming for a total length for the first draft of not more than 180,000 words, which means that if I can stick to my 500-words-a-day quota until I'm done, I should have a manuscript by Memorial Day. Then I'll set it aside for several months before editing it, during which I'll be at work on a project that involves neither Princesses nor SPACE!!!. It will, however, involve the son of a lighthouse keeper, a band of gypsy-thieves, and a man in black with an eye-patch and an enormous black feather in his hat. That one's another idea that's been knocking around my head for years, so it's time to do some excavation. And after that, it'll be back to my Princesses, for their sequel adventures in SPACE!!!

I love writing. I hope I can publish some of this stuff!