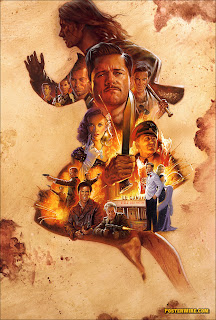 Pulp Fiction has been a favorite film of mine ever since it came out...which is why it strikes me as odd that until quite recently, it was the only Quentin Tarantino film I've seen since I first heard of him. All I've seen of Tarantino's work was Pulp Fiction and episodes of ER and CSI that he directed (both of which, very well, in my view). I did start to watch Kill Bill Volume One a few years ago but never finished it, for no real reason. And there I stopped, until I finally got around to watching Inglourious Basterds a month or so ago.

I loved this movie. Absolutely loved it. I loved it for what it is: a big, violent, gory, profane cartoon parody of jingoistic war movies.

Tarantino is not everyone's cup of tea. He tends to construct long scenes consisting of conversational duels that are punctuated by violence, and that's certainly on display here, several times, in sequences whose tension increases as Tarantino delays the violent payoff, and delays it again, and delays it still again. The very first scene does this, when a Gestapo commander drops in to visit a French farmer. His visit seems dull and routine; our Gestapo fellow at first doesn't seem terribly invested in what he's doing: searching for hiding Jews. He initially gives off an air of a man just going through the bureaucratic motions, and the farmer seems to be just answering his questions until he buggers off. But at some point it becomes clear that he's not going to bugger off, and that this dull Gestapo bureaucrat is anything but. As I thought back over this scene, I kept trying to pinpoint exactly when it is that this man, Colonel Landa, takes on an air of quiet malice, but he does. It's the most unsettling kind of malice, the smiling malice of a man who knows that his job is to mete out death and that he will do his job and then go home and go to bed at night.

This 'delaying of the payoff' recurs over and over again throughout the film, such as an extremely tense scene set in an basement tavern in France that never seems to end, or in a moment in a restaurant when a girl who is hiding the fact that she is a Jew finds herself at a table with Hermann Goering. In fact, this payoff-delaying tactic of Tarantino's shows up in the very first shot, as our French farmer watches the Nazis driving up his road. Watch this scene and realize, several times, that the Nazis should be there by now.

The seriousness of this scene contrasts with the sheer absurdity of the storyline that has a drawling American, Aldo Raine, recruiting a special team of assassins – out of Jewish-Americans – whose job will be nothing more than to operate in Europe and kill as many Nazis as possible, in as violent a way as possible, so that their reputation – the 'Basterds' – will reach back to Berlin and strike fear into the heart of the highest command, including Hitler himself. Raine's team and their casual acceptance of torture and execution is a bit unsettling, but there's also something weirdly exhilarating about it all. Maybe it's because it's the Nazis and we know that we can hate on them just fine, but Tarantino allows the 'rank and file' Nazis to have just enough personality that it's a bit unsettling when Raine uses his bowie knife to carve a swastika into the forehead of one of them ("I'm gonna give you something you can't take off"). But only a little.

And as usual, in a Tarantino film, so much of the weight is carried by the dialogue, such as when Raine realizes that a captive Nazi has decided to be defiant, so he shouts to one of his men: "We got a German here who wants to die for his country! Oblige him!"

This parody material exists alongside a revenge story, as an escapee from the film's first scene later encounters Colonel Landa again (in a scene that made me realize that never has whipped cream looked creepier). She hatches a plan to do nothing more than kill Hitler himself. How? Well, he's coming to see a movie. In the theater she owns. She's going to get everyone in there, bar the doors, and set the theater on fire. I can only assume that this is an allusion to the infamous events at Oradour-sur-Glane.

Why is Hitler coming to France to see a movie? The film explains that, too, but I'd just as soon not get into it. The whole film is awash in odd coincidences, broad strokes, and scenes stitched together with narration by Samuel L. Jackson.

Since it's Tarantino, it's not unexpected that his knowledge of film history is going to come into play at some point. The key location of the second half of the film is a movie theater, a key plot point hinges on the flammability of film stock used in the 1940s, the timing of the plot hinges on a reel change, and so on. Tarantino's visual sense is as keen as ever; Inglourious Basterds includes one of the most striking visuals I've ever seen, as the movie keeps projecting onto clouds of smoke, creating swirling images of film in a film. 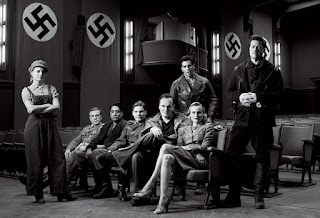 Ultimately the movie seems by turns serious and silly, which I think is rather the point; it's not unlike that old Captain America cover that has Cap punching Hitler's lights out. And it all helps that the film is acted almost perfectly. There isn't a single weak spot in the cast, so far as I can recall, and it's all grounded by Brad Pitt as Aldo Raine and Christoph Waltz (who won an Academy Award) as Colonel Landa. Even so, I think the best performance belongs to Melanie Laurent as Shoshanna, the escaped Jew who later gets her chance for revenge. She perfectly captures the tension of someone walking a tightrope as trying to maintain a secret identity, carry off a revenge plot, and fend off the advances of a smitten Nazi. 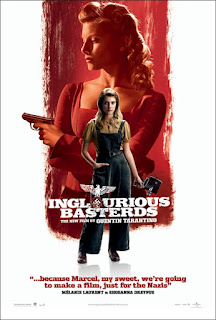 This film has a certain unsettling effect, because I found myself laughing at a lot of very violent death being meted out in large quantities against Nazis. But it's so over-the-top, so cartoonish, that ultimately I think that the film works best as gonzo comedy that is a blending of genres than anything else.

(Poster above via)
scrawled here by Kelly Sedinger at 12:05 AM

I'm going to give this one a try after all. I absolutely loved Reservoir Dogs, but everything else Tarantino did after that was pretty much meh for me. I have this soft spot for Nazi satire, though and it'll help with waiting for Iron Sky.