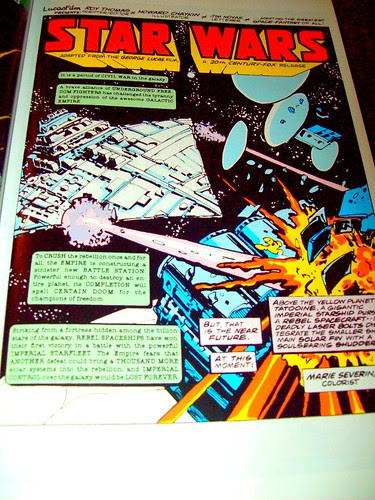 It's kind of odd to think of it now, but once upon a time, there was no Star Wars. I know, weird, huh? And once upon a time, the only stuff out there with Star Wars on it were the movie itself (which you had to see in theaters), a novelization of the movie with George Lucas's byline on it (but actually ghost-written by Alan Dean Foster), and the comic book by Marvel. Here's the first page of it.

The original are was by Howard Chaykin, who would stick around for ten issues before leaving and being replaced by Carmine Infantino for a while. The first six issues were strictly an adaptation of the movie, but based on the original shooting script, so you had the deleted early scenes with Luke Skywalker looking up at the sky during his work and seeing flashes of light -- the flashes of laser cannon fire between the blockade runner and the Imperial star destroyer -- and his conversation with Biggs, who reveals his intention to leave the Imperial Academy and join the Rebel Alliance. There is also the deleted scene between Han Solo and Jabba the Hutt, which was eventually put back into the movie by George Lucas, but as there was no design for Jabba at that time, Marvel made him into a trim, bipedal alien.

After issue #6, Marvel found itself with a hit comic and no idea what was to come in the Star Wars saga, so they struck out on their own, first with a story tracking Han and Chewie as they return with their money to pay off Jabba. Unfortunately they get attacked by pirates, who steal the money; then they find themselves on a backwater world that's even more backwater than Tatooine, where they end up in a rehash of The Seven Samurai. Meanwhile Luke is sent out to look for a new planet for the Rebels to put their hidden base on, because the Empire is sure to counterattack at Yavin pretty soon. Luke finds a world that is nothing but ocean, where a whole separate war is going on. Then the heroes end up together on a space station that's a giant Las Vegas in space. And so on.

The Marvel Star Wars comics were really a lot of fun, especially during the period between A New Hope and The Empire Strikes Back. Without guidelines of what to do (or probably with some vague limitations), the Marvel series was basically a lot of fun space opera adventure. I didn't get to read these stories until some years later, during the mid-1980s, after Return of the Jedi had come out, and as part of my big comic book collecting phase, I amassed the entire run of Marvel's Star Wars books. The generally light-hearted, adventurous, swashbuckling tone of those thirty-one or so issues of the book (their Empire Strikes Back adaptation would begin with #39) was partly in keeping with the tone of the first film, the film in which the mythic aspects of Star Wars weren't quite so prominent as in later films (although they certainly were prominent). The tone of the book would shift after TESB to put the Rebel Alliance and its struggles in sharper focus, and the Empire would become significantly more important.

After Return of the Jedi, the comics lost a lot of their focus. The series kept going until issue #107 (ROTJ had been adapted in its own four-issue limited series, with #83 or 84 being the first post-ROTJ story in the series). At the time, the book was setting up an alien invasion story, but this got wrapped up by necessity entirely too quickly. This was not surprising, really; Star Wars pretty much went completely dormant after ROTJ left theaters, and wouldn't awaken until 1991 and Timothy Zahn's novel Heir to the Empire, which would launch the entire "Extended Universe", which is still going strong to this day.

The Marvel Star Wars comic has been anthologized several times. Oddly, even though I still own all the original issues (albeit in my parents' garage), I haven't picked up the anthologies.

It's funny... even though they fall into that same shadowy, non-canonical status as Splinter of the Mind's Eye, the Marvel comics up through the ESB adaptation are more authentically "Star Wars" to me than just about anything from the Expanded Universe. And on some days, I'd tell you they're more authentic than the prequel movies, too! Probably because, as you point out, there was so little SW material out there during the years between the first two movies, and being just a kid I accepted it all as part of the same universe. I love, love, love these comics... especially that whole cycle on the water world with Captain Jack and his retrofitted star destroyer coming after Han Solo. Great space opera material.

I always have so much fun with those comics, especially in the swashbuckling space adventure years. I felt so bad for the writers in the interim between TESB and ROTJ; they needed to come up with three years of stories that Han Solo couldn't appear in! Lots of good Lando stuff in there, though. And we got Plif and the Hoojibs, my favorite non-canon characters in all of Star Wars.

My other favorite story is the one where the Empire builds a Star Destroyer almost as powerful as the Death Star, and there's a conspiracy on the Moffs to kill Darth Vader. I just remember being blown away by the scene where someone opens the airlock, only for Vader to actually pull himself back into the ship, step by heavy step.