I'm thrilled to get to use this again: 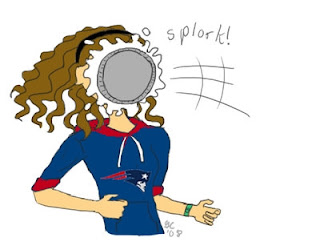 Ahhhh, how sweet it is! Watching the Patriots lose just doesn't get old, folks. Nosiree Bob. Without further ado, some random thoughts on the game:

::  He's been retired and broadcasting for three or four years now, but I still want someone to take Rodney Harrison's knee out. What a goon he was as a player.

Seriously, the Patriots looked sloppy early and they looked sloppy late. St. Tom giving up a safety on a panic throw to avoid a sack? Twelve men on the field? The Pats have a reputation for not playing that sloppily. I'm not sure the rep is as earned as it should be, but there it is. They put it back together, though, and played well for the second and third quarters, before getting sloppy again in the fourth, with Brady throwing the game's only interception (and only turnover, period) on an ill-advised, dumbass play and his receivers getting a bad case of the Drops.

:: I think that the best quarterbacks in football right now, in high-pressure situations, are most definitely Eli Manning and Ben Roethlisberger (last year's flat performance in the Super Bowl notwithstanding, and the Steelers were actually very competitive in that game after digging a surprising early hole). St. Tom's pressure-QB reputation is, for my money, not well-earned. He lost Super Bowl XLVI, Super Bowl XLII, and the 2006 AFC Championship games, despite having the ball for the last minute of each of those games (and in one of those, he only needed a field goal). And even going back to his "big winning drives" in Super Bowls XXXVI and XXXVIII, well...those were drives in which he took over with the score tied, so unless he turns the ball over, the worst thing that happens is the game goes to overtime. I think that the Myth of St. Tom took a big hit last night.

:: Put it another way: Joe Montana never lost a single Super Bowl, much less two Super Bowls. Joe Montana drove his team ninety-two yards for the winning touchdown in Super Bowl XXIII (yes, he had two minutes and change to do it in, but so what? He got the job done), and he also produced two Super Bowl blowouts in games in which he was supposed to produce Super Bowl blowouts. St. Tom is a great quarterback and will be a well-deserved Hall of Fame player. But the discussion of St. Tom as the 'best ever quarterback' is, for me, over.

:: Continuing a theme: I don't think that the Patriots are going to fall apart as a team, but I do think that this year is probably St. Tom's last, best chance to win a Super Bowl. He's going to be another year older, and like I've said before, physical decline comes to everyone, and it's going to come to him -- especially now that he's going into his twelfth year as a starter, who has also played more than twenty post-season games. That's literally packing an extra season-and-one-third into his career. It takes its toll, and I think we'll start seeing that toll before long. Brady likes to talk about playing until he's 40, but I'd bet that if he does, he's playing someplace else, because the physical decline will have become undeniable to the point that Belichick either trades or cuts him after drafting his heir-apparent.

:: Interesting article along those same lines:

Dynasties always believe they can last forever, until they begin to crumble. And their greatest men and fiercest warriors — their Tom Bradys — always believe in their own excellence and its nearly immutable power to make things work out as they’re supposed to.

Until they are bested enough times to know better.

“We just didn’t make enough plays,” Brady said. “We all wish we could have done a little bit more. It comes down to one play at the end. If we make it, we’re world champions; if we don’t, we wish we were.”

Yes, but the fact is the Patriots had to have it come down to one miracle play. And the Giants, in not getting beaten by the long-shot throw, may have shown Sunday that the Patriots’ time is over. Super Bowls are incredibly difficult to get to, even for teams that have made five of the past 11.


:: No one will mention it much because they've got three titles to their credit, but this Super Bowl loss means that the Bills, Vikings, and Broncos have new company in the "four-time Super Bowl loser" club. Huzzah!!

:: Cris Collinsworth wasn't as annoying as I thought he might be. But I did find it odd that at the end of the Giants' last drive, when the Giants were trying to put up the go-ahead points without leaving too much time on the clock, they mentioned that they might want to get a first-down at the 1 without scoring and then just run the clock all the way down until they have to kick the field goal...Al Michaels and Collinsworth kept discussing this whole series without mentioning that the Pats lost to the Bills back in Week Three on an identical situation.

:: Random goofy fact: Only six teams have lost to the Bills during the regular season and still gone on to win the Super Bowl. (This year's Giants are not one of those.)

:: Another random goofy fact: the AFC East is 2-9 in Super Bowls against NFC East teams. Ouch.

:: On the commercials: As usual, I don't care and pay little attention. I use commercials for their intended purpose: going to the bathroom, getting food, writing, checking Facebook, et cetera. The only ones I watched were a few of the movie trailers (none of which looked all that good, except for The Avengers), a pretty sappy Toyota Camry commercial, and a Clint Eastwood commercial for Chrysler that ratcheted up the "America, YAY!" to 11 and seemed to also be saying, "Hey, remember that Camry commercial from before? F*** those people." (But here's a thought: the fact that such a grittily optimistic ad could be aired this year might say something about the mood of the country that might, in turn, be good news for a certain sitting President.)

:: On the halftime show: I liked it a lot. It was actually a show, and featured an artist who is still producing new material and who wasn't content to just do a quick "greatest hits" thing. I loved the goofy Egyptian panoply, and I started Tweeting a bunch of Egyptian and Roman-related pop culture quotes, such as "Give my regards to King Tut, asshole!" (from Stargate) and "If you wanna find all the cops, they're hangin' out in the donut shops" (by the Bangles). Still, it was a really good show by Madonna. Color me impressed!

That's about all...except for these, because really, I could look at scenes like this all day:

Ahhhh! Thanks, 2011 NFL! Next up, free agency and the Draft. Football never stops! It just slows down a bit.

scrawled here by Kelly Sedinger at 6:58 AM