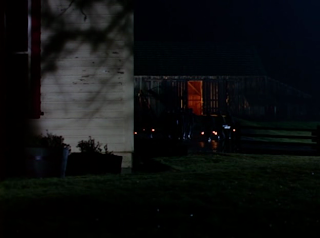 Insular religious sects are always a good breeding ground for tales of supernatural suspense, so it was just a matter of time until The X-Files got there. "Gender Bender" is that episode, and it's...well, I literally could not decide if I liked it or if I didn't.

A man picks up a woman at a dance club – or she picks him up – and they return to a hotel room for a bit of action. Unfortunately for the man, the bit of action turns out to be fatal...and then the woman leaves the hotel room...as a man.

The oddness of the case leads to the summoning to Agents Mulder and Scully, who show up to do their investigative work. A bit of dirt on the victim leads Mulder to conclude that there is some connection between the murderer and a specific area in Massachusetts, an area noted for being the home of a hyper-secretive religious sect called "The Kindred". Mulder and Scully approach some members of the Kindred on the street – they are clearly modeled on the Amish, only a lot creepier – and while Mulder gets nowhere, Scully manages to get one of the Kindred men to open up a bit, by showing concern for their horse. A very odd moment happens then, when the man seems to almost seduce Scully right there, in the middle of the street.

What follows is a delving into some very strange stuff involving the Kindred, their practices when one of their own dies (rituals involving catacombs beneath a barn, slathering the dead with white clay, and holding the bodies in what can only be described as 'gestation tubes', whereupon the dead man starts to acquire the features of a woman).

It turns out, of course, that the murderer is an escapee from the Kindred, and that the Kindred desperately want to maintain their secretive way of life, which means that they want to handle the lapse of one of their own themselves, without the aid of the FBI. This is eventually what happens, when Mulder and Scully track the killer and corner him, only to have the Kindred show up and then disappear with him. When the agents return to the Kindred farm, they find it completely abandoned, with the catacombs sealed with white clay, and a freshly-made crop circle in the field.

Like I said above, I can't decide if I like this episode or not. The standard X-Files creepiness-through-atmosphere is in full force here. And the acting is really top-notch, especially the guy who plays Brother Andrew, the Kindred member who seduces Scully. It was a good choice, casting a guy who is not particularly handsome, as a guy who apparently oozes enough sexual energy to bend Scully to his will. It's eerily believable, in some way.

However, "Gender Bender" offers even less by the way of answers than most episodes of The X-Files, and that's really saying something. Most times we're told, or at least led to suspect, what has been going on, but here...I got nothin'. A religious sect that somehow regenerates its members, changing genders in the process? And they all give off enormous amounts of pheromones? And what is with the crop circle? Were they aliens? I think they basically tried cramming too much into this episode. Supernatural murder through sex is a fascinating concept that could have been explored well on its own (and maybe it was, later on in the series...I don't recall offhand), but here there are too many elements to really be dealt with in any kind of satisfactory way. The Kindred themselves are potentially fascinating, but again, they're in and gone from the series too quickly to say.

I don't know. "Gender Bender" is a typically well-made episode...but it's an atypically unsatisfying one.