Yup, I'm a day late. I had a job figuring out this week's prompt, and I was pretty busy yesterday, anyway. We're given a photo prompt...but what we're supposed to do is write from the point-of-view of a person standing at the window indicated by the arrow. 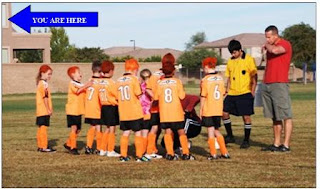 
"Home One, Agent Niner-five-alpha reporting in. I'm in position. Over."

"Acknowledged, Niner-five-alpha. What is the current status, over?"

"Can you identify the target, over?"

"That's affirm. Seven, with red hair. Target is apparently disguised as an eight-year-old youth. I cannot identify target from this distance. Require instruction, over."

"Niner-five-alpha, retreat from your position and reacquire target at the next location. Understood, over?"

"Acknowledged. Report when target acquired. Over."

So...which one of those carrot-topped kids is really a diminutive secret agent? Errr...I have no idea, actually. Pick one!

Hahahaha! What a terrific take on the prompt! Very clever, Jaquandor!!!

That was such an imaginative take on the prompt, and it made me laugh. GReat job! laurie @
http://dealingwithmyinnercritic.blogspot.com/

Great fun! Well done - this is so clever. I love the idea of the disguise!

It is DEFINITELY number 6! See her head bent down speaking into the microphone sewn into the letter on her jersey?

This was so great!

I love the unexpected twists and turns you take us on!