This, I am afraid, is what our country now is. 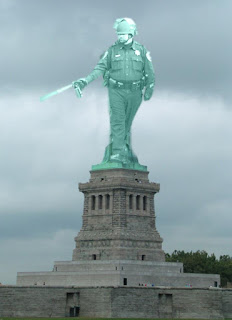 We don't welcome the world's oppressed who are seeking freedom; no, we're all about shutting the borders and denying freedom to those already here. We're Pepper Spray Nation now, when a cop can just casually walk back and forth pepper spraying peacefully-gathered activists as calmly as if he was walking his dog.

And anyone thinking, as apparently does FOX News idiot Megyn Kelly, that pepper spray is benign stuff because hey, it's made of pepper, let this article disabuse you of that notion. 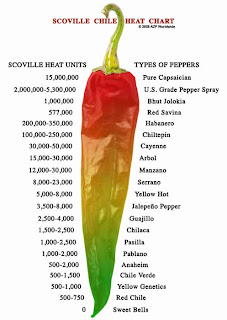 This is a chemical designed to repel humans by causing them intense misery and pain and discomfort. Hmmm...the key word there is chemical. I'm pretty sure we took a dim view, ten years or so ago, of governments that used chemicals on their own citizens. I wonder why we've decided otherwise now that it's just those dirty hippies who we're spraying.

I dunno...I just have zero idea what kind of country we are anymore. We don't believe in providing healthcare to all citizens, and we instead believe that it's OK for most people to be one serious health crisis away from utter disaster. We don't believe that government spending can create jobs and help stave off economic calamity, but we do believe that when the military wants to close a base or two, it's time to demonstrate because of the jobs. And we don't believe in governments quashing protests in other countries, but here, it's just fine.

Just who the hell are we, anyway? I wish I knew.

Email ThisBlogThis!Share to TwitterShare to FacebookShare to Pinterest
Labels: Anger and Rants, Politics

America is what it has always been, just now it is in the grip of fear. As we all know, fear can make otherwise decent people do hateful things.

Pepper spray and the liberal use of the baton is nothing new. Ask anyone who demonstrated for civil rights back in the 6o's. Ask anyone who stood up to Senator McCarthy in the 50's. Ask union organizers in the 30's. Ask Italian immigrants in the 1900's. Ask Irish immigrants before that.

Abusing the authority that comes with a badge is wrong. It doesn't matter of it's 1911 or 2011. I believe these instances are signs of an upheaval, but it is through these upheavals that nations achieve growth, especially the United States.

Sorry to go on, but that's just my view from the outside -- I am a Canadian, your neighbour to the North -- and I have been watching you all my life. I don't often say this (don't often have to, 'cos you guys say it about yourselves all the time) But you are a great nation, greater and stronger, I believe, than the dark times which are happening around you now.

There will be a light and when you see it, walk towards it.

Who are we? We are just people, with the same flaws as people anywhere else in the world. What makes us different is we (still, so far) have the right to publicly speak up when we see something that isn't right, to criticize the government and to vote the bums out of office. I just hope that in the next election we vote out the right bums.

I just found out today that pepper spray is banned from use in overseas warfare because it's a chemical weapon. Worth keeping in mind the next time someone goes off about how harmless they think it is.

I'm with you, Kelly. I don't know what the hell has happened to this country.

Just today I posted a video by Robert Reich discussing the First Amendment and the OWS situation on Facebook, and I was appalled by the comments I got back. One guy, a coworker of mine, basically said "the OWS people were breaking the law, so they deserved what they got." How the hell do you respond to something like that? Why do some people apparently assume that if a cop or a soldier does something, it's always justified? And why is there such loathing for the Occupy folks? Because many of them are young? Because their politics tend to be leftist? Can you imagine the outcry if those kids at UC Davis had been tea partiers and some thug in body armor had hosed them down with a chemical weapon? But because they're libs, they "deserve" it.

No, I don't know what has happened to this country, but I know it makes me insanely angry...

I saw the comments on your FB thread, and I typed out a caustic response...and then deleted it. The idea that any response the police feel like meting out against anyone 'breaking a law' is nauseating, not to mention dangerous. (And your friend Amber just strikes me as someone who likes being a contrarian, whether she has any actual argument to make or not.)

I know that we're just people, and people aren't perfect, but dammit, our entire national narrative -- this patriotic mythology we've concocted for ourselves -- advances America as the most moral, most free, most intelligent, most educated, most innovative, just plain most country on the planet. But the reality just doesn't match up to the rhetoric...and all I hear is either more of the same rhetoric, or excuses for not living up.

I just don't even understand this country anymore. I don't understand what we value, what we want, or if we have any idea how to get it. And I don't think many other people do, either.

You're absolutely right about my friend Amber... and FWIW, her tendency to argue with just about every damn thing I say lately is beginning to wear thin.

The big problem I have at the moment is not that I don't understand what Americans value, want, etc. It's that what I value and want -- what I think America is supposed to be, in other words -- seems to be at odds with what a significant percentage of our countrymen believe. For me, it's e pluribus unum (or e plebnista, if you're an aging Trekkie like me), not "one nation under God" or "in God we trust," and certainly not "WE'RE NUMBER ONE!" or "Love it or leave it."

I have a friend like that, and it can get pretty obnoxious...I'll say something, and he'll respond, "Well, I don't think that's the case..." and then proceed to advance an "argument" that turns out to be, in just about all its particulars, identical to what I had already said!

As for American values: what it boils down to, for me, is that I simply don't understand how so many people can look around at this country of ours and then shrug their shoulders and say, "Well, as long as my taxes are low, I'm good with this."

In California, a woman used pepper spray to gain advantage for her Black Friday shopping at a Wal-Mart.

The use of pepper spray by authorities, anmd its 'harmless' spewed by FOX 'news' = that sort of rampant stupidity.