X-Files Case Report: Beyond the Sea 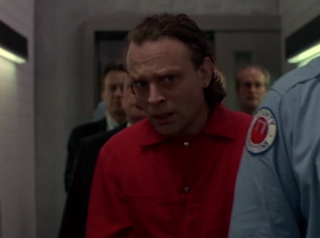 "I know that you and Dad were disappointed that I chose the path I'm on instead of medicine, but I need to know: was he at all proud of me?" (Dana Scully, to her mother)

After "Fire" gave us some more background on Agent Mulder, "Beyond the Sea" takes us deeper than we've ever gone before into Scully's background, giving us one of my very favorite episodes in the entire X-Files run. This episode is, simply put, outstanding.

We open with Scully winding up a visit from her parents, who are now heading home. Scully's father is a career Naval officer, who calls his younger daughter "Starbuck". After they're gone, Scully falls asleep on her couch, but awakens to see her father sitting in the armchair. He is talking, but she can't make out what he is saying. Then the phone rings, and when she looks back to the chair, her father is no longer there. She answers the phone, to be told by her mother that her father has just died. Has she seen a ghost?

Meanwhile, two young lovers who have driven out to the woods to make out are abducted by a violent criminal, and a massive search begins. Mulder is called in, because a serial killer named Luther Lee Boggs who is about to be executed is suddenly claiming to have knowledge of the abduction, by virtue of his supposed psychic ability. Mulder, we learn, had been instrumental in Boggs's capture, and in a rare event for the series, he is the skeptical one: he hands Boggs a scrap of cloth that belonged to one of the victims, which provokes a "psychic vision" in Boggs, but when it's all done, Mulder simply says "I tore this off my old Knicks t-shirt."

Scully, however, sees something in Boggs, when he begins spontaneously to sing the song "Beyond the Sea" (which had been one of her father's favorites) and directly addresses her as "Starbuck", which had been her father's nickname for her. Scully is deeply vulnerable, and when Boggs gives her a scrap of information that turns out possibly to connect with the case, she begins to possibly believe. And this time, it is Mulder who is cautioning her. Boggs, sensing that he has a believer in Scully, tells her that he has information that can save the lives of the two most recent abductees...which he will reveal if she intercedes against his execution.

This episode is outstanding in a lot of ways. The X-Files always had high production values, but this episode raises an already impressive bar, with atmospheric filming that is downright cinematic. Secondly, the script is intelligent, never making the kinds of leaps that lesser TXF episodes often made, and not beating the viewers over the head to get them to come to the right conclusions. The dialogue in this episode crackles, and the acting is flat-out terrific. This is Gillian Anderson's first real chance to delve a bit more deeply into the character of Dana Scully, and she allows us to see hints of the real fears that drive this intelligent and often cool-as-a-cucumber FBI agent. Her fears of disappointing her father, and more importantly, her fear that there just may be something to all this X-file business, start to show through the cracks in her outward strength that this episode shows. Special mention must also be made of Brad Dourif, who plays Boggs with a perfect blend of creepiness, revulsion, and ultimately, sympathy as he walks the "Green Mile", fearful of what he is about to face.

"Beyond the Sea" is also notable for the first real delving into a frequent theme of the entire series, namely, that of fatherhood or parenthood in general. Mulder's father would prove to be the more visible figure throughout the series's run, but it's interesting that the show started going down that road with Scully's father, as Scully is more of a gateway character for the audience than Mulder, who is already a full-believer and is on his own journey. Scully has farther to go, and it's her father's death and the emotions it brings up, specifically her need for him to have been proud of her, within her that starts her on that journey. It's also worth noting that Scully's choices regarding Mulder begin to become clear in this episode, when she turns down Boggs's offer to "channel" her father for her in favor of visiting Mulder at the hospital.

"Beyond the Sea" is The X-Files at its best.
scrawled here by Kelly Sedinger at 6:26 PM